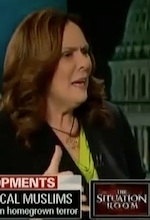 I am still trying to get my arms around this one. The CNN anchor is interviewing Congressman Peter King, who soon become chairman of the House Homeland Security Committee, about his intention to hold hearings on the extent of radicalization within the American Muslim community. It has set off a firestorm of political correctness in the lefty blogs … as demonstrated nicely by CNN anchor Candy Crowley. “There are just going to be a certain amount of unhappy people in this country and it has nothing to do with being Muslim.” Unreal. The post is long, but stay with me.

As background, Congressman Kind announced last week he intended to hold hearings next year to determine the radicalization of Americans within the Muslim community and what that community is doing to cooperate with law enforcement in identifying them. If it sounds perfectly reasonable … that’s because it is.

As first reported by the New York Times, King is planning to hold the hearings once he takes up the chairmanship of the House Homeland Security Committee. He says the hearings are planned in response to complaints from law enforcement officials that Muslim leaders have been uncooperative in terror investigations.

“When I meet with law enforcement, they are constantly telling me how little cooperation they get from Muslim leaders,” King told the Times. “It is controversial. But to me, it is something that has to be discussed.”

The hearings come at a time of increased concerns about “homegrown” Muslim terrorists – along with persistent fears that innocent Muslims have been unfairly targeted since the Sept. 11, 2001 terrorist attacks.

But it has set off a firestorm, mostly on the left, and mostly from CAIR. It’s also brought out some of the same tired apologists in the Main Stream Media who continue to work their politically correct best to ignore a growing problem in the US and in the process allow this problem to fester and the danger to grow. Exhibit A is CNN’s Candy Crowley who, after Peter King explains why he is holding the hearings, drags out not just the Tim McVeigh was a terrorist too meme but then doubles down by adding terror these days has nothing to do with religion.

I have no idea if King is right that Muslim leaders are holding back information from law enforcement, although I do know Muslim families have been quick to turn in their kids in at least two cases, the Christmas Day bomber, and the Christmas Tree Bomber. CAIR has also been adamant about detailing Muslim cooperation. But King says he has been assured by law enforcement Muslim leaders are indeed holding back and it seems reasonable to investigate to what extent.

Add to that, Eric Holder’s insomnia over the growing radicalization of “Americans” … then I think King has an obligation to learn more. What bothers me is an American media and our own government that simply refuses to state publicly that the enemy is nothing more than radicalized Americans. Holder never mentions religion once in his ABC interview.

“The threat has changed from simply worrying about foreigners coming here, to worrying about people in the United States, American citizens — raised here, born here, and who for whatever reason, have decided that they are going to become radicalized and take up arms against the nation in which they were born,” he said.

In the last 24 months, Holder said, 126 people have been indicted on terrorist-related charges, Fifty of those people are American citizens.

But for Crowley to publicly state that the terror threat is anything but a Jihad by Islamic radicals is not just stupid, but dangerous. And Candy, McVeigh happened 15 years ago. Stop. Enough.

UPDATE: Ed Morrissey makes a good point, and one worth noting, on the mindset at the White House in not identifying religion in this home grown terror. As Ed points out, if they know the problem exists. not identifying the source publicly is not problematic.

The fact that they have arrested so many and apparently all sharing radical Islamic beliefs indicate that they’re more focused operationally on the threat than they are rhetorically in their public relations.  That may be a strategic impulse at the DoJ — refraining from adding to a notion that America is at war with Islam itself — in order to keep a lid down on the numbers of those radicalized.  As long as they have the right approach operationally, I’d be willing to trade the rhetorical PR for the results.  Airport security is another issue entirely, of course, under the purview of a different Cabinet member (Janet Napolitano), and Bruce makes a great point.

I agree to a point. If the American people are led to believe that this threat is anything but a religious war, as is the case with this administration, then they are less likely to object to the confiscation of their individual freedoms and liberties that should be guaranteed by the constitution. Once they are gone, those rights are gone, and it seems an American citizenry more easily part with those liberties if they believe the terror threat is from “within” instead of from within a specific community. Or am I wrong?

Christie steps in and commutes sentence of New Jersey man convicted in gun ...

Net neutrality … have no fear, the Government is in control
Scroll to top