Whenever we read a story about a kid fighting cancer, emotions run high and you end up feeling awful and sometimes inspired at the same time. Brennan Daigle’s story and what a few solders did for him will inspire you. It really is the little things… 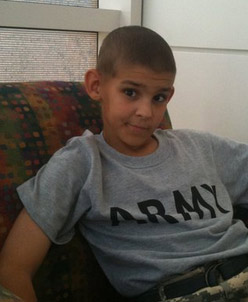 Since October 2009, Brennan, from Sulphur, Louisiana, has been battling embryonal rhabdomyosarcoma–a rare form of cancer in which muscular tumors attach themselves to bones, writer Rachel Reischling reports in the Fort Polk Guardian. Last month, doctors told his family there was nothing more they could do, and gave Brennan just weeks to live.

Brennan has always loved the Army.  His mother had created a Facebook page–Brennan’s Brigade–to keep family and friends informed of his condition. People from around the world, including soldiers in Iraq and Afghanistan, have left comments of encouragement and support. One group of soldiers in Afghanistan posted a picture of themselves holding an American flag, and told Brennan: “We’re flying this flag in honor of you; we’re here to back you. Stay Army strong.”

Becky Prejean, who runs a charity for sick kids called Dreams Come True of Louisiana, heard about Brennan’s illness, and got in touch with his mother, Kristy Daigle. Brennan’s greatest wish, Daigle told Prejean, was to meet some soldiers in person, before his illness worsened. So the two women contacted the Fort Polk Community Relations Office, which put out a call for a few soldiers to attend Brennan’s tenth birthday on Feb. 26.

Go read the full story and check out the Facebook page.

Michael Walsh: The left’s war on democracy in Wisconsin
Scroll to top