I just got an e-mail from David Plouffe who manages the political Web site for President Obama. He’s looking for 279 people to call Rep. Chris Murphy (D-Conn.) in support of the Democrat’s plan. OK – I say call him and e-mail him right now and ask him to vote no.

If Plouffe thinks he can get 279 people to call, I bet I can get 2, 790 people to call or write and ask Rep. Murphy to vote no on the current legislation. At first glance, you would think that Murphy is on the fence about this legislation since Plouffe thought it necessary to send out a mass e-mail to the area, but I’m not so sure. Either way … fill up the e-mail box and make some calls this afternoon.

If you are outside the district, pick up the phone and call (202) 225-4476 immediately and politely ask the staffers who answer the phone that you want Rep. Murphy to vote no on the current health care legislation in Congress.

If they wish to ignore you because you are outside the district, politely tell the staffer they have the right to call representatives including Chris Murphy on a regular basis if they continue federal power and control grabs that are unconstitutional. Chris Murphy’s votes have a direct impact on all residents of the United States and he will be held accountable by everyone.

The e-mail sent out 30 minutes ago… 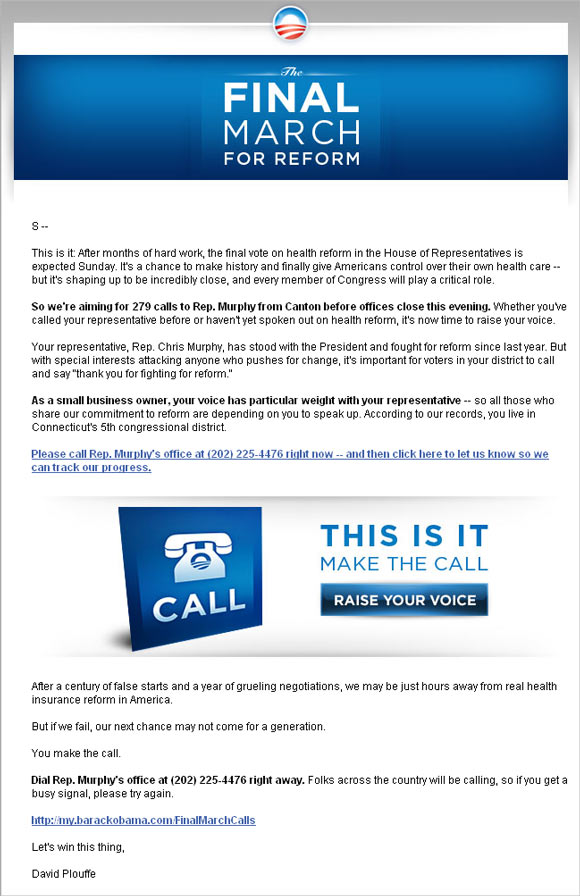 Olbermann proclaims he would rather go to jail