With campaign finance regulation, comes a great amounts of data. You had to know that this was coming. Does this map freak you out? Maybe just a little? 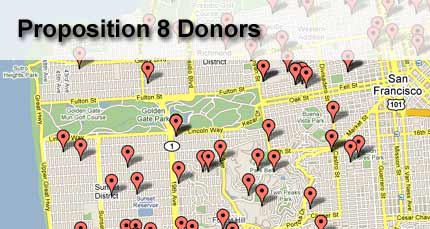 Many events tend to raise suspicion amongst the population. Take for instance, a person walking the street carrying a pistol in a holster openly; not concealed. Some may completely ignore the event, but others may feel threatened and totally freaked out by the person and call the cops.

Some of these people get arrested for disturbing the peace, when in fact, they were doing something that they were legally permitted to do.

Should the tolerant folk putting these maps together be considered for breach of peace charges? Of course, they are doing something legal, but it is freaking people out.

If you were on this donor list, would you feel this is a threat? Would you feel bullied into never supporting a cause in the future that you strongly believed in?

The donors who supported Proposition 8 are being targeted for violence. Will future attacks be considered a hate crime? Probably not…

Do we see any Google mash-ups that combine a map with those who donated for committees that were fighting against passage of Prop. 8? Would those folks feel that they were being targeted by “hate groups” that would target the people on that list?

My guess is that we’d see court action pretty quick if those mash-ups became popular on the Internet. (Note: we’re going to start seeing them soon if they are not already up)

We were considered fascists for questioning theirs, but it’s patriotic for them to question ours.

“Oh, come on man… just because there is a map listing the home address and name of every donor does not mean it will come to violence in California”, you say?

Sure… it’s been going on since the day Prop 8 passed.

Google Maps: No Roads in Israel?

Prop 8 supporter information was not leaked by IRS

Tolerance on display in California – what a $100 donation can do