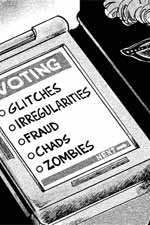 I’m sorry, this crap just does not happen on its own. In Illinois, a Republican state representative candidate tried to vote for himself and other Republicans, only to notice – before he submitted the completed ballot – the votes were being cast for his opponent and other Democrats.

You want to discuss voting rights abuses? Maybe the non-existing war on women? Forget it, here is where the real abuse is happening, from the blog Illinois Review on Monday.

Admitting his confidence in Cook County ballot integrity is shaken, State Representative Candidate Jim Moynihan (R-56), was shocked today when he tried to cast a vote for himself and the voting machine cast it for his opponent instead.

“While early voting at the Schaumburg Public Library today, I tried to cast a vote for myself and instead it cast the vote for my opponent,” said Moynihan. “You could imagine my surprise as the same thing happened with a number of races when I tried to vote for a Republican and the machine registered a vote for a Democrat.”

While using a touch screen voting machine in Schaumburg, Moynihan voted for several races on the ballot, only to find that whenever he voted for a Republican candidate, the machine registered the vote for a Democrat in the same race.

I’m waiting for the Department of Justice to run towards Cook County and launch an investigation. Can you imagine if this “touch screen calibration error” occurred in a tightly fought district and the “error” favored the Republican candidate? All hell would be breaking loose.

ACORN to “Help” with US Census

Shocked, Shocked I am…