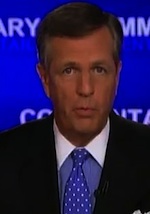 With lefties it’s always about trying. Whether it’s Little League or the Big Leagues, trying is the thing. Results? That’s for mean spirited conservatives and conservatarians. Juan Williams and Mara Liasson try to make the case that if Obama just explained more or better or something, he would have the support of the American people. That’s just a little too much for Britt Hume. Game on.

To set this up, the three are commenting on the CNBC Tow Hall Meeting where a woman asks The One if her new reality is franks and beans. Where, she asks, is the hope and change. Liasson responds by sayinbg Obama needs to explain more … and Juan agrees. Hume responds in stunned disbelief. Smack down.

Do you really think that the woman at the CNBC Town Hall would be satisfied with trying?

Obamacare: here’s an idea, let’s steal from the seniors

CT Congressman Himes: Sure, I’d vote for another stimulus
Scroll to top