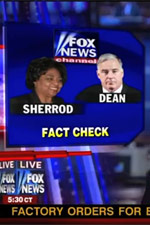 I’ve heard from people who frequent Radio Vice Online and listen to the big radio show state Fox News commentators pushed Breitbart’s Sherrod video and suggested she had to resign immediately during the day, before she resigned. Bret Baier responds.

I did not watch Fox News during the day and have not reviewed the tapes. If someone can provide me with video from Fox on that day showing commentators or news anchors describing or discussing the Breitbart-posted video during the morning, afternoon or evening before Bill O’Reilly mentioned it late in his show, it would be appreciated.

Hat tip to Frank Ross at Big Journalism, who links to the video from Johnny Dollar’s Place. I’m going to add here that I swear Baier corrected the record during a previous program and this is the second time he pointed out the time line. This time, he runs the video in fast forward from the complete day.

UPDATE (jim): Watched Fox all day that day. No mention of Sherrod until O’Reilly’s Talking Points. Brief. Hannity spent more time and so did Dana Perino subbing on Gretta’s show. That was all after she was fired.

Health care reform will not be televised – ZoNation video

Cavuto to Obama: It isn’t we don’t like you … we just don’t believe...
Scroll to top