Not good for the Obama campaign at all.

From our buddy Ed Morrissey at Hot Air.

The decline in American production continued in the second quarter, according to the new release from the Bureau of Economic Analysis.  The Q2 GDP growth rate (annualized) was a meager 1.5%, down from 1.9% in the first quarter and 3.0% in 2011Q4.

The reason I link to Ed first, is that the first news I saw online about the second quarter GDP was over at CNBC … the same place Morrissey notes in his post. I have to screen-capture this and show it to you since I’m almost certain they are going to change it. Note the line with the red border, added by me. 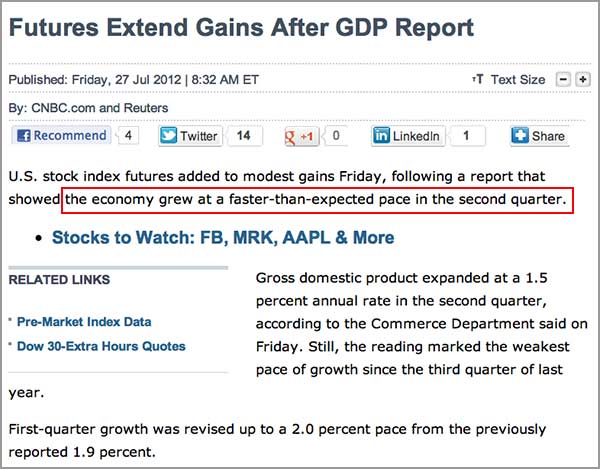 As noted, they did revise up the GDP numbers from the first quarter, but if growth was around the anemic 1.5 percent and that was better than expected, expectations are pretty low.

GDP at plus 3.5%, cash for clunkers and home buyers big factor

Why Not Just Change the Definition of a Recession?

Durable goods orders down 4% to start the year

Advance GDP estimate for second quarter revised down from 2.4% to 1.6%
9 replies

He’s a dreamer … let him go

United States cyber security legislation may include a high-capacity magazine...
Scroll to top