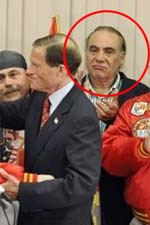 Blogger Doug Ross and William Jacobson at Legal Insurrection think they’ve spotted a “poser” at the Blumenthal press conference. For those of you who are not familiar with the term, it applies to the thousands of people who claim either Vietnam war status or medals they did not earn.

The man in question is standing just behind Bluemnthal to the right (Blumenthal’s left). Ross writes: 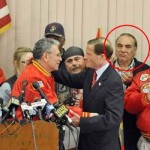 William Jacobson confirms it is Storm. Hmmm. If all of this pans out, it’s another blow to a guy who I think has blown up his career.

OK … I need my Veteran friends to do a search on this and let us know. Get back to me in the comments section.

UPDATE: God Bless Free Republic … it looks like they started the ball rolling on this one. Gateway is on this too … even worse, Blumenthal called the guy in to appear with him.

The New Haven Independent reported that Blumenthal called supporter Storm who helped him out today.

Elliott Storm is a Blumenthal supporter. The campaign called him and asked him to show up; he called up his friends in the “Vet Pack” to join him, friends who, like him, travel around the country talking about ex-soldiers who contend with post traumatic stress syndrome.

Oh brother. Blumenthal is done. It is time for this guy to resign. Not just from the race … from AG as well. Disgrace.

Update 2: OK … Trumpower did serve. Vietnam Vet … but the POW network data base reports he claims medals – Bronze Star with Valor device – he did not earn and a rank he did not reach. He claims 2nd Lt.

Here’s what I do not understand. Just like Blumenthal, he served and apparently with a distinguished record, combat action and Purple Heart. So why do these vets and service members feel the need to embellish the record? Their service alone stands on its own.

Update 3 (Steve): Jim asked me to step in and clarify the title.

The Evolution of Richard Blumenthal