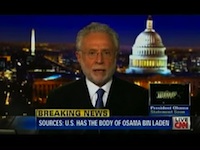 A magnificent mission of the four-door Navy SEALs, and it took plenty of guts on the part of this president to pull the trigger on this one. But it certainly didn’t take long for the left stream media to take a shot at President Bush. Make no mistake this is a great accomplishment for the young president. But let’s not forget the groundwork and intelligence was laid by the Bush administration. Still, CNN and Democratic Congressman Gary Ackerman couldn’t resist the moment. Video below the fold.

The first video is a clip from last night CNN coverage. Wolf Blitzer is interviewing former Bush administration official Fran Townsend. He gets everything off to a good start by rubbing Townsend’s nose in it. Nice job Wolf. Oh and about the 1 min. mark, notice a comment that bleeds into the on-air broadcast. I’ve listened to this about 10 times and it sure sounds like a CNN producer, who apparently doesn’t know his Mike is feeding into the production, seems to drop a nice expletive deleted on Ms. Townsend.  You tell me. Either way, nice job CNN.

The second video clip is an interview wealth. With Democrat Congressman Gary Ackerman. Ackerman couldn’t resist either. “ This is the mission accomplished moment George Bush only dreamed about.”

This is a great moment for all Americans and freedom loving people around the world that does transcend politics and it speaks volumes about at least some Democrats to turn a great moment into politics.

As for class, listen to Fran Townsend and Peter King here, give Obama his props. 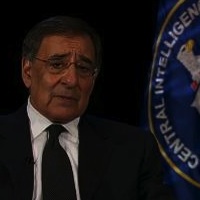 “Q) How do you get a Democrat to pay their taxes? A) Nominate him to a cabinet position.”

800 Billion Reasons To Be Worried
30 replies