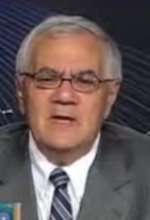 I have watched this video three times and I am still not sure what he is talking about. But Olbermann sums it up. It’s like we’re slaves or something.

Frank obviously is referring to the Citizen’s United case that allows corporations to contribute to issue advertising during elections. I’m a capitalist so my feeling is, if you are going to tax a corporation as if it’s an individual, it should be able to take public positions on issues that affect it as well. What’s more, as my Mom always taught me, there are no corporations, only people who make up corporations, and their interests as a whole, should be represented in a democracy.

But even setting that aside, Barney is quick to dismiss George Soros’ contributions to American political discourse, to the tune of $1 million for Media Matters. Or maybe the billions shoved by the unions to Democrats (that’s my money too). Still it’s his premise that there are two American economies, the haves a lot and haves a little and somehow the haves a lot aren’t part of a Democracy?

The money line comes at the end from Olbermann. 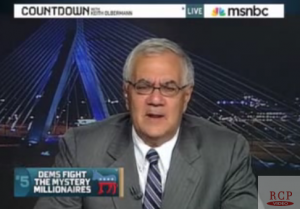 You asked for it! Barney Frank vs Joel Pollack

Matthews more convinced than ever that … Palin’s running for Pr...