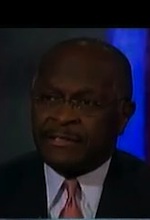 Tucked within the “DEAL” are a couple provisions to extend the “Obama Tax Cuts”. It’s the price Republicans paid to get the extension of the “Bush” tax rates. But Godfather’s Pizza founder Herman Cain sees it a bit differently.

The Obama tax deal includes the continuation of two tax credits that were increased in the Obama stimulus package. From the Washington Post:

Democrats got $120 billion in payroll-tax cuts, $40 billion in refundable tax credits (Earned Income Tax Credit, Child Tax Credit and education tax credits), $56 billion in unemployment insurance, and, depending on how you count it, about $180 billion (two-year cost) or $30 billion (10-year cost) in new tax incentives for businesses to invest.

It’s the EITC and the education tax credit that was key to the Obama compromise and the reason is it fits so well into the left’s mission to redistribute income. In simple terms, both of these credits offer tax refunds to people who owed no taxes and/or have kids in college. It may sound compassionate, but both are simply another way to redistribute taxpayers money to other people. It sounds innocuous enough except to people who pay attention to this stuff, like Herman Cain.

Cain thinks giving this to Obama was a small price to pay for maintaining the current tax rates, but I disagree. I wonder what the point of allowing people to keep their cash is, if you are only going to turn around and borrow to redistribute to others. Eventually that bill comes due. And if the economy doesn’t begin to grow … this will just grow the deficit.

I am beginning to sound a little cranky … so I will leave this to your comment section.

Perhaps there is a victory in the Obama Tax “Compromise”