Some suggest this is an administration attempt to disarm pilots, but my quick research indicates this probably is not true. I read the editorial yesterday, but I elected not to write about it since the opinion piece was so vague.

… President Obama is quietly ending the federal firearms program, risking public safety on airlines in the name of an anti-gun ideology.

The Obama administration this past week diverted some $2 million from the pilot training program to hire more supervisory staff, who will engage in field inspections of pilots.

In fiscal year 2007, the program received $25 million in funding, and in 2008 it was suggested that funding increase by $2.5 million. If the Obama administration is diverting $2 million from the program elsewhere, this is not an attack on the concept of arming pilots.

What does concern me is statements noted in the editorial from program participants.

Pilots cannot openly speak about the changing policies for fear of retaliation from the Transportation Security Administration. Pilots who act in any way that causes a “loss of confidence” in the armed pilot program risk criminal prosecution as well as their removal from the program. Despite these threats, pilots in the Federal Flight Deck Officers program have raised real concerns in multiple interviews.

For those of you involved in the FFDO program – is this true?

Since less than 3 percent of flights have air marshals, I’m quite fine with pilots having access to a firearm as a last resort to keep hijackers off the flight deck.

FFDO training is not your everyday gun safety and shoot at a few targets class. For a full week, pilots review legal issues, use of force, firearms training and defensive tactics. They are trained specifically for protection of passengers – by keeping hijackers off the flight deck.

Training is provided by the Federal Air Marshall Service, which is the right organization since they too, deal with guns inside pressurized tin cans at flight level 250. (Little ATC lingo for you there…)

The Times notes program participants are – for a lack of a better phrase – very well behaved.

The 12,000 Federal Flight Deck Officers, the pilots who have been approved to carry guns, are reported to have the best behavior of any federal law enforcement agency. There are no cases where any of them has improperly brandished or used a gun. There are just a few cases where officers have improperly used their IDs.

Fewer than one percent of the officers have any administrative actions brought against them and, we are told, virtually all of those cases “are trumped up.” 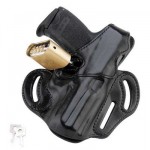 Other than the stupid holster design – click on image to enlarge  – FFDOs need to deal with, this is a good program that should be continued.

Ed at Hot Air asks if we are disarming pilots, as does Malkin and Atlas Shrugs.

Carbon permits are alive and well, at least in Europe

No, we do not need additional firearm regulation
5 replies