That title should send a shiver or two down your spine, but this is a good time in American history to consider if some portions of the United States Constitution are being completely ignored. Do some Americans – do you – think parts of the Constitution does not reflect what America wants anymore?

If you don’t think – let’s use the 10th Amendment for the heck of it – applies in our day-to-day life anymore, you should immediately get on-board with some Internet group to create and pass a new Constitutional Amendment…

The 10th Amendment is hearby repealed.

It’s as simple as that, but statist who want more federal control and more cash stolen from one and dished out to others perfer a more subtle approach. One that has been slow, but consistent in its incremental approach to reduce liberty and increase tyranny.

I’ve written about the subject enough, but Andrew Sumereau over at American Thinker has a piece today that you should read.

The question to be explored is this. By what authority does the federal government intervene in health care?

Ah, the stumper! This is the kind of question that reduces arguments to sputtering. The of course-ness factor takes over and results in a virtual cognitive interruptus. The idea that government (whatever that is) exists to fix problems (whatever they are) is so ingrained in the common mentality that the very question of what is proper is not even considered. Surely only cranks and constitutional fossils would ever go there! But, of course, our founding fathers started there.

In the era of Obama’s imperial presidency, with ever accumulating and unaccountable Czars, explosive debt, bank bailouts, corporate takeovers, Congressional redistricting, tax increases, a lack of any perceptible restraint on the judiciary, the sad reality is dawning on many if not finally on most that we live in a post-constitutional nation. The volume and emotion of the protests comes both from a sincere anger and panic but also from the frustration of an inarticulate and uninformed citizenry that feels what it doesn’t know. People may cry “liberty!” and “hands off” but don’t have the education and intellectual ammunition to make a solid case.

So, planning to take the country back? It is best to begin with the basic propositions.

If the Tenth Amendment is accorded proper respect and contested with half the zeal bestowed on the First and Second Amendments, many of our problems and serial crises will be resolved. And the real beauty of this approach is that no legislation or political grace needs to be enacted. 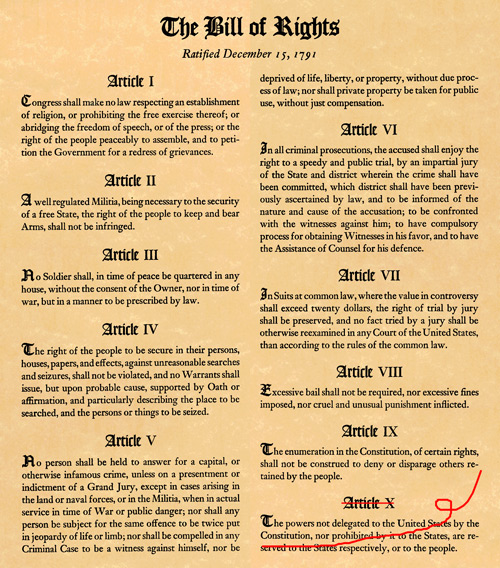 Hey McDermott - Congress does not have authority to fill gas tanks

Why all the fuss about reading the US Constitution yesterday?

Money and Politics - How to Buy a Vote

Williams helps us understand the Constitution