Democratic Senatorial candidate Merrick Alpert is a smart man, Started a business from scratch, sold it, presumably made a bundle, cleaned up and helped sell off another. So he knows his numbers.

With that in mind, during last night’s Democratic Senate Debate, how could he possibly make a statement like this.

On the other hand, his business’ number client was the government, so maybe he’s on to something. But hey, if you’re gunna make up a number that is backed by nothing … why not just say you think we should spend a gazillion dollars of taxpayer money on another stimulus, because the first one worked so well. From The Day (via Capitolreport)

But that stimulus package didn’t even approach $1 trillion, and it was passed at the brink of a recession that lawmakers in both parties were trying to prevent from becoming much, much worse. It’s too kind to say that a proposal from the new junior senator from Connecticut to give stimulus another whirl and round it up to an even trillion while you’re at it would be a non-starter. That go-kart doesn’t even have an engine in it.

Just as reminder to Mr Alpert, here’s what his kids will owe over the next ten years under Obama … and that’s without the $1 trillion dollar porkapalooza he’s proposing. Exit question, since there’ no money left, where’s he planning on getting the trillion from? 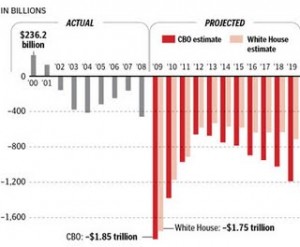 Malloy To Hospital CEOs: ‘I Know You All Want More of My Money’