Additional details on the failed terrorist attack over the skies of Michigan on Christmas day. Federal authorities say Abdul Farouk Umar Abdulmutallab, a 23-year-old Nigerian student was directly supported by al-Qaida in Yemen. He was not on the official no-fly list, but Abdulmutallab’s father had warned U.S. officials months ago concerning his son’s activity.

He also had Internet communications with a radical imam in Yemen, who provided direction and was allowed to board an aircraft to the United States with 80 grams of PETN (similar to nitro-glycerin) – the same stuff failed shoe bomber Richard Reid tried to use – strapped to his body some how.

He was also banned from returning to England when he tried to go back claiming he was going to take a class at a bogus school. At this point, it does not look like he was banned because of his terrorist connections. Hat tip to Pamela Gellar at Atlas Shrugs.

Umar Farouk Abdulmutallab, 23, graduated from a university in London last year but his visa request was refused in May when he attempted to apply for a new course at a bogus college.

Abdulmutallab, described as a devout Muslim, attempted to ignite an explosive device on a plane from Amsterdam to Detroit on Christmas Day after shouting about Afghanistan.Bomb materials had apparently been sewn into his underwear, an authoritative American report said.

I’m still wondering if there was an air marshal on the flight, but most concerning is the fact Abdulmutallab’s father went to the United States officials six months ago and warned us about his son’s activities. AJ over at Strata-Sphere blog has more.

Incredible. First the Obama administration prematurely and stupidly closed down a terrorism investigation into US Army Major Nidal Hasan, who then went on to massacre 13 people plus one unborn infant while injuring 31 more Americans.

Now we learn that the Obama administration was told about the terrorist threat of Abdul Mutallab from Nigeria by his own father – and yet failed to take action while almost losing a plane full of passengers on Christmas day.

From the NY Daily News…

The terror suspect who tried to blow up a Detroit-bound plane is the son of a Nigerian banker who alerted U.S. authorities to his “extreme religious views” months ago, it was reported Saturday.

The father, Alhaji Umaru Mutallab, a former minister and chairman of First Bank in Nigeria, is shocked that his son was even was allowed to fly to the U.S., family members told the Nigerian newspaper This Day.

We’ve also got some details about the passenger who stepped up and took some action. Thanks much Jasper.

When he tried to ignite powder strapped to his leg with a a chemical-filled syringe, he was tackled by a heroic passenger aboard Northwest Flight 253. 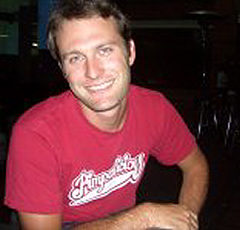 The passenger, Dutch video director Jasper Schuringa, told CNN he heard a big bang that sounded like a firecracker, then saw smoke and flames.

Schuringa said saw the man’s pants were open and he was holding a burning object between his legs.

“I pulled the object from him and tried to extinguish the fire with my hands and threw it away,” Schuringa said.

Schuringa grabbed Mutallab and pulled him to the front of the plane.

“He was staring into nothing,” Schuringa said.

Schuringa said he stripped off the man’s clothes to check for other explosives and a crew member helped handcuff him. Passengers apparently applauded his efforts as he walked back to his seat.

“My hands are pretty burned. I am fine,” Schuringa said. “I am shaken up.”

Schuringa was taken to the University of Michigan Medical Center Friday night.

Of course, you’re probably thinking Abdulmutallab was a poor Muslim young adult wrapped up in jihad with nowhere else to go right? Figure he was mad and demanded revenge on America after his friends and family were brutally attacked by Predator drones somewhere? Not.

As noted above his father was a former minister and chairman of First Bank in Nigeria, but guess where Abdulmutallab’s current address is? Again from the New York Daily News, with my emphasis in bold.

He is an engineering student at the University College in London. His last-known address near the school is a $4 million apartment in Central London.

According to the authorities, Abdulmutallab says he made contact via the internet with a radical imam in Yemen who then connected him with al Qaeda leaders in a village north of the country’s capital, Sanaa.

Authorities say they do not yet know if the imam was the same one who was in contact with Maj. Nidal Hasan prior to his alleged attack on soldiers at Fort Hood last month. American-born Anwar Awlaki has lived in Yemen since 2002 and is considered a major recruiter for al Qaeda by U.S. authorities. He survived a U.S.-backed air strike earlier this week

Oh, and as a reminder, the Obama administration is sending many Guantanamo detainee terrorists back home … to Yemen. Stories here and here, with hat tips to Hot Air and Sweetness & Light.

Others updating posts include Morrissey at Hot Air, who wonders how the TSA is going to deal with underwear checks in the future. It’s relatively easy to take off our shoes, but…

It’s difficult to see how TSA will create standards to protect against suicide underwear.  Thanks to Richard Reid, we have to take off our shoes before getting to the gate now at the airport.  An underwear check will certainly make security today, with all of its delays, seem like a breeze in comparison, when breezes from airport air conditioning start hitting new places altogether.

Head over to Hot Air and check out that post since it has much more.

Intellegence community: 10 to 20 e-mails between Hasan and Islamic cleric

It’s come to this: Plea bargaining with terrorists – Update: SOS weighs in.

What carry-on explosive can blow up an airliner?

US negotiations with Taliban in Afghanistan not going well

Islam – making a true difference to the world … with violenceWhat carry-on explosive can blow up an airliner?
Scroll to top