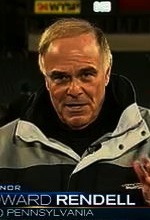 This is the driver of the morning. If you are not familiar with the story, the Eagles cancelled their game with Minnesota scheduled for Sunday night because of the threat of snow. That’s all Ed Rendell needed to hear. As you listen to this interview you will be stunned this is a Democrat. Listen to him as he talks about personal freedom.

Earlier on ESPN Rendell had called the cancellation the “wussification” of America. Later when interviewed by Brian Williams he stands by the charge and even doubles down. The best part comes mid way through the video when Williams asks the PA Governor how would be feel if the game wasn’t cancelled and a young family got into an auto accident. Rendell’s answer makes him sound more like a raving Libertarian instead of a nanny state Democrat. Enjoy.

UPDATE: Ok … a chance to add my final thoughts on this. Rendell of course is right. People deserve the chance to decide for themselves if it’s too dangerous to drive to the game and my guess most people in Philly would be more than willing to take that risk … or not. The point is we as individuals should be able to make that decision. On the other hand, as one caller pointed out this morning, then we lose the right to complain if things don’t turn out the way we would like?

Here’s the link to AP’s story and the initial comment on ESPN where Rendell drops the wussification bomb.

Governor Ed Rendell on Sestak job offer: Hey sometimes you need to use some bare knuckles.

You were hoodwinked, bamboozled, duped

Thousands of Golden Eagles in Danger, Due to Wind Farms
5 replies