Unlike almost every other news story that mistakenly reports a “machine gun” was involved with some sort of crime, these guns really are machine guns; submachine guns to be specific. LAPD housed these weapons in a facility with no alarms or security cameras.

The 21 MP-5 submachine guns and a dozen Colt 45 automatic [sic] pistols were taken from a locked container inside the Kennedy Building on San Pedro Street, police officials said.

The location — which formerly housed clothing firms before it was donated to the LAPD several years ago — is considered a secure site, Deputy Chief Michael Downing told the Associated Press.

While the weapons had been modified to fire training ammunition, the concern is that they could easily be converted back to fire live rounds.

The Heckler & Koch MP5 submachine gun shoots 9mm rounds, and depending on the trigger group, can send one round , two or three round bursts, or go full auto. These MP5s had full auto capability as I understand it, but they were configured to shoot simunitions, which are non-lethal training rounds. LAPD is suggesting it would be a “significant” issue to modify them to fire live rounds. 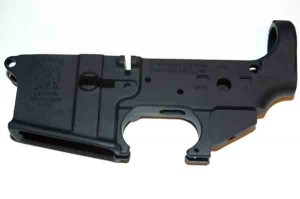 Lower: This is the important part as far as the ATF is concerned.

Here’s the problem as I see it, and I could be totally wrong. Note the images – simply to help with definitions – are from an AR-15, not an MP5.

The MP5 simunition conversion kit involves changing out the complete upper of the rifle. The upper (includes the bolt carrier group and the barrel) is not an NFA item. It does not (generally) have a serial number and you can buy them without a background check.

The lower has the Class 3 trigger group (full auto for the MP5), magazine well and the serial number. The lower is what the BATF considers the “gun” even though you can buy it without the trigger. (Yes, when you are carrying around that lower as pictured, it’s considered “the gun” even though it has no barrel.)

Upper: This is the part of the gun that would need to be changed.

But if they are interchangeable, dealers should be watching for parties interesting in buying MP5 or MP94 uppers with no need for the lower. If they can just buy the upper and everything works … they have a full auto carbine.

Most likely along with buying the complete upper, some fitting would be required by a gunsmith. Even with the upper, it would take some skill … easy to put together, but it might not fit right.

Again, keep in mind the LAPD kept these weapons locked in a container, at a facility they describe as “secure” while having no alarm system or security cameras.

Note: The CBS article refers to Colt 45 automatic pistols, which is almost certainly wrong and proves true my first sentence in this article. Most likely, they are 1911 Colt 45 semi-automatic pistols that were converted for simunitions and most certainly are easy to convert by replacing the slide and barrel – again parts that you do not need a background check for.

What was Governor Jerry Brown thinking?

Lawyer Allred throws illegal alien client under the bus for $6,210

Your money and high-speed rail

What happens when you run out of other people’s money?
13 replies

Open Thread: Your thoughts on the GOP debate in Las Vegas last night
Scroll to top