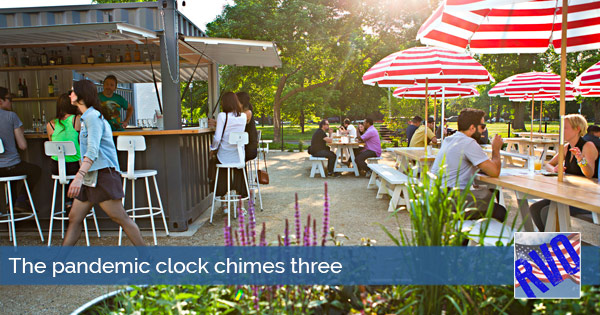 To quote an historical figure who will be nameless here: “There are decades when nothing happens; and then there are weeks when decades happen.” As many of us can sense, we may well be in such times. Two months ago we were governed with our consent (mostly). We had life, liberty and were pursuing happiness each in our own special way. We then entered an unprecedented national societal lockdown and told, for own safety, not to venture out. We complied – because literally there was no place to go. As time wore on, a trip to the supermarket became the highlight of the week.

We were told, “just a month longer.” We grew mighty restless. We materialized at our state capitals to petition our petulant rulers with our justified grievances. We were scoffed at, ridiculed, lectured, humored…anything to disperse us for the moment. As we returned to voluntary confinement, our “non-essential” businesses atrophied by the day. And then there were murmurs of a coming lifting of the insufferable pall. Yes, there will be a reopening, but our rulers warned – “not so fast…there will be rules…there will be a new normal.” Again, that term we have come to despise. It’s code for changes decreed under cover of a crisis. We’ll take plain normal, thank you.

And they weren’t kidding. Home Depot can open, but if you open your hair salon you’re going to jail. You can push your child in her stroller on the sidewalk, but if you push her on a swing in a park you’re taking a ride in a squad car. You must be masked in public, and if you don’t wear it properly in the New York subway you’ll be body slammed on the platform by six transit police. You’re now welcome at your local restaurant but only if you eat outside. You can have a drink, but only with a meal. If you’d like one at the bar, you may not – but you may get one to go. And if you’re dining in Washington state, Governor Inslee will have your name and cell number recorded just in case there’s virus lurking and you must be tracked down. What could be a more naturally social distancing setting than a beach (and Coronavirus hates sun and heat). But if you head to one of Long Island’s endless beaches and decide to stop and pitch a blanket, Governor Cuomo will have you summoned. And don’t even think of going in the water. If you do, NYC mayor de Blasio will have you removed, and you may ruin it for everyone, as he has threatened to fence off the water at Coney Island – just because he can.

Yes they’re jailing us for cutting hair, but they’re releasing criminals from prison “for their own safety” onto the public streets. You can go to church but only online – cause they’re handing out $500 fines for attending services in your car in the church parking lot. You can run a NASCAR race – but only if there’s no one watching in the stands. Illegals in California are now invited to apply for pandemic relief checks. Both legal immigrants and illegals can enter the U.S. with no bio-testing, but it’s said our rulers are rumbling about requiring immunity tests for citizens to come out in public. Of course this entire piece could be filled with such examples causing us mental backflips. But as Ayn Rand was fond of saying, “there are no contradictions – check your premises.” So, if most all of these measures seem insidiously confounding on their face, is there an organizing theme?

Any illumination requires we see past the immediate paranoia and widespread concern generated by the chaotic development of the Pandemic. Though the national cues were taken from the Coronavirus Task Force, the actions which have impacted our lives and communities have largely emanated from the governors’ offices. And while their motivations and justifications surely vary, tactically they involve heightened control and surveillance of the citizenry. The initial lockdowns descended upon us swiftly in mid-March. With the expectation they would be short-lived we played along “just to be safe” and to keep the healthcare system from being overwhelmed. But we were quickly bait-and-switched with a barrage of case, hospitalization and fatality data, into another thirty to forty five days of lockdown, lest we open too soon and risk the Son of Coronavirus in the fall!

The financial catastrophe envisioned in the first tick of our pandemic clock was now becoming real for small business owners, but state control rendered them unable to take action. While we were effectively under house arrest, our TVs blared at us from all channels that “we’re all in this together.” No we aren’t – the people who are incessantly telling us this, all have jobs. We’re told to clang pots and pans daily at 7pm to thank the healthcare workers and we’re shown pictures of people doing exactly that on the evening news. They’re testing our patience and testing our limits. To many of us it all feels like a psy-op. And just when there seemed to be a new state-capital protest each day, our rulers finally released some steam from the national pressure cooker, as limited reopening activities commenced state by state. But many businesses are mandated to function under the most ludicrous and financially debilitating regulations.

One only has to look back over the past few decades to see that government power, extended during a crisis, is never, ever fully returned to the people. Our Constitutional rights are consistently ratcheted away from us, and this episode promises to be the worst case of our lifetimes. The Pandemic has now been politicized and we can see distinct differences in the approaches of red vs. blue states.

In the blue states, generally home to the big cities teaming with knowledge workers, the governors are taking a hard line and are slow to reopen. “Stay at home, don’t be selfish, consider the health and safety of others” rolls so easily off the tongue of someone comfortably working from home, but still expecting their supermarkets to remain open and stocked. These people may never have faced real life risks before. Why should those who don’t daily face real risk have so much control over the rest of us who do? The unconnected workers and small “non-essential” business owners who are out of work and have so much more at stake, feel like they’re being incinerated by capricious government decrees, and those who issue them. Red state people know safety cannot be assured – we flattened the curve, now let’s get on with it.

Blue state governors are generally in worse financial shape, and have traveled to the White House seeking federal bailouts under cover of the pandemic. They are slow to open, worsening their financial condition, perhaps to bolster their case for a federal bailout, or perhaps to further weaken the economy to impair Trump’s prospects. Here in Connecticut, Governor Lamont has laid off his responsibility to the Reopen CT Advisory Group, a bevy of some 48 members, meeting in private. They announced a three phase reopening orchestration which stretches into the last days of July, and concocted a grid of metrics by which they can easily move the goal posts should they see fit. We small business people formed the “Council of Non-Essential Businesses” and just filed a FOIA request with the governor’s office to obtain access to his Advisory Group’s deliberations. It may be denied and we’ll have to sue. That’s what it’ll take to regain our rights. Over in the UK, when asked last week what he’s learned during this ordeal, Prime Minister Boris Johnson noted, “I’ve learned it is much easier to take people’s rights away than to give them back.” Ain’t that the truth!

In selected U.S. cities they’ve put drones in the air to monitor social distancing, and some have the capability to measure the relative body temperatures of the people under observation. Others have speaker systems ready to bark orders from the sky should we stray from proscribed behavior. Then there’s the steady hectoring that there’s not enough testing and tracing – now coupled with murmuring about a soon to be released phone app to do exactly that. Soon we won’t be able to leave our homes without a test and a phone with the tracking app in our pockets – don’t doubt it.

Yes, as our pandemic clock strikes three the theme is control and its coercive cousin – surveillance. They are on the march and must be met. No, we’re not in Kansas anymore – don’t know where we are exactly – could be at the dawn of the seventh crisis.