You are here: Home1 / corporations

With your money! I completely get the fact that for some large companies it makes sense to have one – or even a fleet – of aircraft in their stable, but this was not the time for Citigroup to place an order for a new corporate jet. 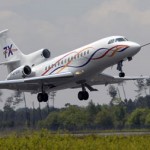 The Falcon 7X business jet is a pretty sweet ride, but if they really needed to buy a jet, couldn’t they have purchased a Gulfstream, an American based manufacture?

Going forward with the purchase of this new jet – and selling two jets that are only 10 years old – can only be described as a stupid marketing decision. Even if they say the purchase would save them a million dollars a year, the public will not be happy at all.

Have they ever heard of video conferencing?

Beleaguered Citigroup is upgrading its mile-high club with a brand-new $50 million corporate jet – only this time, it’s the taxpayers who are getting screwed.

Even though the bank’s stock is as cheap as a gallon of gas and it’s burning through a $45 billion taxpayer-funded rescue, the airhead execs pushed through the purchase of a new Dassault Falcon 7X, according to a source familiar with the deal. …

Citigroup decided to get its new wings two years ago, when the financial-services giant was flush with cash, but it still intends to take possession of the jet this year despite its current woes, the source said.

“Why should I help you when what you write will be used to the detriment of our company?” replied Bill McNamee, head of CitiFlight Inc., the subsidiary that manages Citigroup’s corporate fleet, when asked to comment about the new 7X.

“What relevance does it have but to hurt my company?”

It’s not uncommon for large companies to pay a deposit on a new plane then cancel the order before delivery, according to a source in the corporate aviation business.

Those jets, nearly 10 years old, are worth an estimated $27 million each. They were still listed for sale yesterday on the Web site of Citigroup’s aviation broker, Aviation Professionals.

A company representative said she would not comment on “brokering both sides of the deal” when asked about the incoming Falcon 7X.

Gateway Pundit also has the story.

On Tuesday, I saw a headline at the New York Times Web site, Study tallies corporations not paying income tax. This type of story is right up our ally since our readers know that corporations don’t pay taxes; people do. I didn’t get to research the story on Tuesday, but Power Line just provided a kick in the head tonight and reminded me about it.

It turns out that Lynnley Browning and editors at the Times can’t understand basic logic. They figured since two out of three corporations in the study did not pay any taxes, they might as well take the total gross receipts of two-thirds of the companies and assume that 35 percent of that should be tax going to the feds.

They calculated that the government was being cheated out of $875 billion. Idiots. END_OF_DOCUMENT_TOKEN_TO_BE_REPLACED