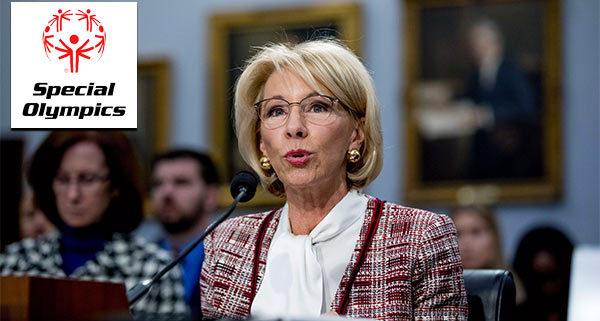 The reporting on this subject is absolutely horrendous. One article headline reads ‘I still can’t understand why you would go after disabled children!’

Politicians love to grandstand. In the age of Trump, quite a few elected officials have gone off the deep end with their soundbites and statements. Betsy DeVos, the secretary of the U.S. Department of Education is a favorite target of the left. It’s not unusual to see comments on websites and social media calling her an evil witch, heartless and sub-human. Some flatly state she should be in prison.

But this post is not about DeVos. It’s about the absurd claims made by statist Democrats who blow things totally out of proportion with outrageous soundbites, and the media who are complicit through their total lack of intellectual honesty.

First, let me start with a disclaimer. I think the U.S. Department of Education (DOE) should be shuttered tomorrow*. Totally close it down. I realize that will not happen, but am willing to ensure the process gets started by eliminating special earmarks to start. That is what the proposed budget does. Many of the earmark cuts – 29 programs totaling $6.7 billion – are for programs that show little or no evidence of meeting objectives, or programs more appropriately supported through local, state and private funds.

If you look at the proposed budget, you can get into the details. You’ll note no news sites – at least that I could find – provided a link to the proposal. Specifically referring to the Special Olympics program grant award, the proposal states…

Such activities are better supported with other Federal, State, local, or private funds.

I agree, but how much money are we talking about here? What does the $17.6 million cut actually represent? For that, you’ll need to do a bit of research. (By the way, a note to Rolling Stone … no, it’s not 10 percent of the organization’s budget, you purposefully ignored all of the state organizations so you’re WAY too high.)

Let’s ask why most of the news articles about DeVos, the DOE and the Special Olympics dive into what percentage of funding the DOE provided to the organization in the past. Few – and certainly not one politician who “grilled” or “blasted” DeVos – asked about it. I started the research the media should be doing to inform the public. I did not determine the percentage since it would take too much time to collect the data.

From what I can gather this morning, Special Olympics in the USA is made up of at least 50 individual 501(c)3 non-profits, plus the home organization based in DC. Some states have multiple organizations filing returns independently. Our donations to this great organization are tax deductible. Contributing our time is the fun and rewarding part.

I took a look at the publicly disclosed Form 990 for just eight state Special Olympic organizations. Line 8 on the form lists contributions and grants received. The numbers do not represent the total revenue, as they do not include program service revenue, investment income, or “other” income. These were the most recent 990s I could find for each of the states listed, some were 2016, some were 2017.

So the total for contributions and grants just for the eight states I researched is about $50 million. Do you think my information is important for this story? Does it provide additional insight? Did you learn something?

Politicians don’t care about insight, and have no interest in getting the full story to you. They would much rather have you only receive the information and soundbites they want you to hear. They grandstand knowing the media will support their narrative. It’s journalistic malpractice.

It’s better to get lines like “I still can’t understand why you would go after disabled children in your budget,” [Barbara] Lee [D-Calif.] said Tuesday. She continued, “You zero that out. It’s appalling.”

‘I’m praying for the Special Olympics’: A special-needs athlete responds to Betsy DeVos

But on Tuesday, his athletic fate suddenly seemed to slip further from his control.

And here is a Twitter comment from a representative implying the end, by using the phrase “seeing their support taken away.”

In @BetsyDeVosED’s budget, there are major cuts to programs like the Special Olympics. Sec. DeVos didn’t know the number of kids who would be hurt by that cut, so I made sure she now knows that 272,000 kids are seeing their support taken away.

Plus you’ve got the Washington Post’s Twitter feed stating…

Is that even news? That’s a political hit and nothing more. Jeff Bezos, the owner of the Washington Post, is worth well more than $100 billion. Just one of Bezo’s New Glenn rockets costs $2.5 billion.

This entire spectacle is just that. Do your research. Don’t trust what politicians say and remember most of the media is part of – if not absolutely running – the establishment left.

* We already have Departments of Education at the school, local, regional and state levels. This is why – in my opinion – the entire department is redundant. I wrote about shuttering of the federal DOE back in January 2012 and December 2011. Read those posts for additional insight.

Ocasio-Cortez and her plan for the 70% tax rate bracket

EP. 1 – The evils of socialism
Scroll to top