Tragic accident at the Whistler Olympic venue just prior to opening day ceremonies in Vancouver. I’ve posted the video here, and it is quite graphic, but it gives you an idea of the speed involved with the sport.

Other luge participants have been worried about the track and how fast it is. The last turn seems dangerous to me with the positioning of the columns on the left and right of the track. The sport itself seems quite dangerous. Our prayer are with the family and teammates.

No need to watch the video, but it does not show too much. The image below (click to enlarge) says it all. 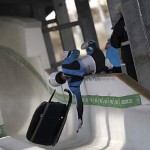 Tragedy struck at the Whistler Sliding Centre Friday morning when Georgian luger Nodar Kumaritashvili, 21, flew off the track at high speed, smashed into a metal girder and died.

The crash occurred near the bottom of the course, commonly billed as the fastest and most challenging track in the world. Kumaritashvili hit the track’s inside wall, flew in the air up and over the outside wall and struck the girder. His speed was estimated at 144.3 km/h.

Joseph Fendt, president of the World Luge Federation, told London’s Daily Telegraph: ‘’The track is too fast. We had planned it to be a maximum of 137 km/h but it is about 20km/h faster. We think this is a planning mistake.’’

Officials are investigating the causes of the accident.