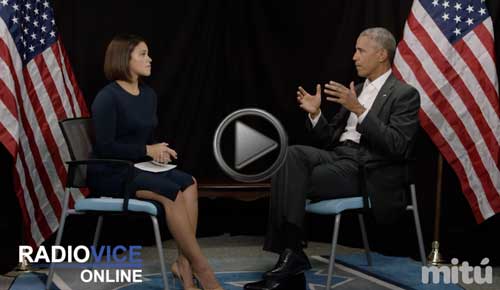 Not quite so fast. He did not understand the premise of the question, or he just was not listening. When Gina Rodriguez asked the question during the interview earlier this week, everyone freaked out about the answer. The video you’re seeing elsewhere cuts off a relevant comment by the president a few moments later in the interview.

But let’s be clear, the president is known for interviews with mixed messages like this.

Rodriguez asked, “Many of the millennials, dreamers, undocumented, ahh… citizens … and I call them citizens because they contribute to this country are fearful of voting. So if I vote, will Immigration know where I live, will they come for my family, and deport us?”

The president answers, “Not true.” He goes on with platitudes about how important it is to vote and not be afraid. It’s important to note Rodriguez just smiled and did not correct or clarify her question. At 1:12 into this clip, the president noted he thought it was important for Latinos – who are citizens – to vote because others in the community may “not have a voice, who can’t legally vote.”

To me, it’s clear what Rodriguez was asking the president, and she let him keep speaking. At 1:09, Rodriguez even mentions “the entire community.” The president did not get it … or did he?

Let’s see if the president actually makes the effort to come out and say if you are an illegal alien, non-resident or non-citizen, you can not vote. It is illegal to do so. He won’t.

Here is a proper edit of the clip. If you’d like to see the entire interview – I’m certain it was edited like any other interview – click here.

Another follow up. Rodriguez is an actress born and raised in Chicago to parents from Puerto Rico. A question for Rodriguez … is she now suggesting it’s OK for undocumented workers (non-citizens) to vote? In her opinion, did Obama give that opinion the green light?

Rodriguez is claiming the question referred to illegal aliens who are afraid of the voting process. Supposedly they think if someone in their family who is a citizen votes, they are at more of a risk to be tracked down and deported. If that’s the case, it’s one of the worst interview questions I could ever imagine. It’s actually an absurd question if you think about it.

Then she follows up with the following.

So if I vote, will immigration know where I live, will they come for my family and deport us?

Again, absurd question. If you are a citizen and voting, how is Immigration going to come and deport you? You’re a citizen.

Bad interview all-around, and just enough “mixed messaging” to let illegals know they can vote with no consequences while the president and Rodriguez can claim “we never said that.”

Clinton has wanted to hide communications for years
Scroll to top