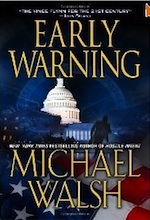 His first book in the Devlin series, Hostile Intent, became an instant best seller and number one in Fiction, or is it? Now the second in a five part series is on the shelves and available at Amazon. Look inside the book below at the Amazon link.From Amazon:

The NSA’s most lethal weapon is back. Code-named Devlin, he operates in the darkest recesses of the US government. When international cyber-terrorists allow a deadly and cunning band of radical insurgents to breach the highest levels of national security, Devlin must take down an enemy bent on destroying America – an enemy more violent and ruthless than the world has ever known.

If you like spy thrillers that are oh so close to reality, this one is for you. From my friend Michael Walsh.

Clearly, something about my protagonist, “Devlin,” resonated with the public, and I hope you find his latest incarnation even more compelling. He’s a hero for our times, a complex man with a mysterious past, part superhero and part everyschmuck, the kind of guy you probably wouldn’t notice on the street but who you most definitely do not want to meet in a dark alley — or, in the case of Early Warning, under the Central Park Reservoir — when he’s got his blood up.  As the most secret, and lethal, weapon in the United States’ arsenal, he puts the security in the Central Security Service — which, believe it or not, actually exists.

Even better … to get the flavor of the book, watch the video clip below.

Want to purchase, and look inside the book, click here.

The most awesome video you will ever see that will make you say “Than...
Scroll to top