Two weeks ago, I wrote about the Los Angeles City Council using the Jessie Jackson Shakedown Plan to force big-box retailers like Home Depot and Lowes to add buildings – with services – to their property to support “day laborers.”

Not to be outdone by Bernard Parks – the councilman who proposed office space for illegal aliens – Jan Perry, another city council member, has proposed a law to put a moratorium on new fast-food joints for the next year. No more Carl’s Jr. for you son, you’re too fat.

Mary Katharine Ham has the full story in her commentary piece on examiner.com.

Los Angeles Councilwoman Jan Perry, in order to form a more healthy district, has proposed a law that would put a moratorium on new fast-food restaurants for one year. It was approved unanimously by a committee and must pass the full council in order to limit food choices for the citizens of South Central for their own good.

Perry started from the premise that there are no food options other than fast food in South Los Angeles. The limited options cause a health problem, she claims, which she is forced to remedy by using government ordinances, which would expand choice by prohibiting an entire segment of restaurants from moving in. The logic is lost on me.

As is the case with most justifications for heavy-handed nanny-statism, the councilwoman’s claims aren’t actually true.

Although there is certainly evidence of disproportionate health problems in South L.A., when compared with other parts of the city, there’s also evidence that it’s not a lack of choices that’s creating them. Perry’s own research shows that fast-food restaurants account for 45 percent of restaurants in South L.A., which though higher than the 16 percent comprised by fast food in West L.A., still leaves 55 percent of food options that are not fast. The district is also home to several grocery store options.

Nanny state alert. Since you can’t find the fresh veggies at the grocery store, we’re going to help you by not allowing any more fast food joints to be built in the area. For a multitude of reasons, this makes no sense at all.

Reporting on the phenomenon of “food apartheid” — this is what they’re calling it — in South L.A. is fraught with anecdotes: Citizens can’t find a salad to save their lives. They eat fried food because there’s simply nothing else. Fresh produce is out of the question.

This sloppy reporting ignores the fact that there are 14 salads available at most McDonald’s, if you count all the salads prepared with each type of chicken. Newspaper reports say the district also boasts a Taco Bell (9 options on a low-fat menu), KFC (6 salads), and Quizno’s (5 salads, separate low-cal menu). The fast-food industry’s shift toward healthier options in recent years has yielded a decent array of healthy choices for very low prices.

Don’t forget about Jared eating all of his meals at Subway, and the guy who lost 80 pounds in six months eating at McDonald’s every day. It should be about the choices that we make, not the choices that the government forces upon us.

It’s all about control. The government thinks that they can raise your kids better than you do. Everything from diet to education is best dolled out by government. Who believes this stuff and why do you let it continue?

Ham’s right on the mark with this statement.

Someone should tell Perry that the last thing the people of District 9 need in their diets is more of her ill-advised laws. Squeezing capitalism, cutting down on choices, and starving the economy will do nothing for the health of any city.

I’m going to continue to read some of Mary Katharine’s stuff in the future and suggest that you do the same. She also looks pretty good toting an AR. (Photo courtesy Blackfive) 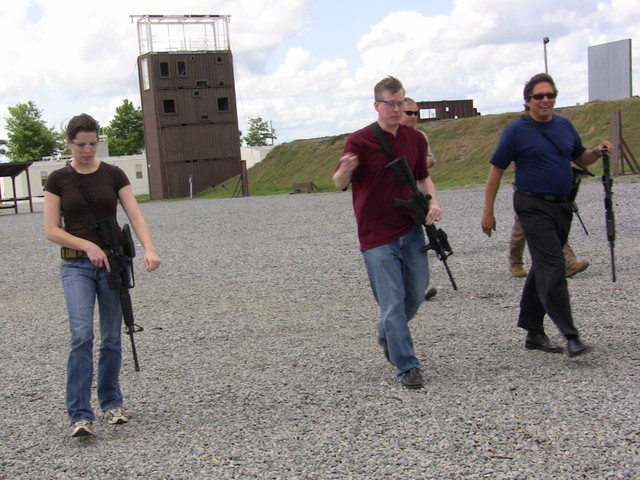 The Fun Police: When the Party’s Over…

LA Health Officials to show kids how to use ecstasy safely … in the name of safety?

Food Police: How many calories are in that olive?

Off Message? Change We Can Count On Me And Mrs Jones
Scroll to top