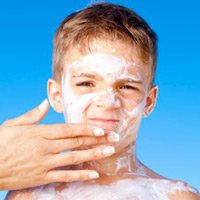 From KSAT in San Antonio, Texas.

Such genius I tell you. Is this one of those one-sided stories where we only hear from the parent about what happened? Nope. My emphasis…

“Typically, sunscreen is a toxic substance, and we can’t allow toxic things in to be in our schools,” Chancellor said.

Chancellor said if parents know their child may be outdoors, they should come to school fully covered in sunscreen. At this time, she said, sunscreen can’t be brought by students to school campuses.

“We have to look at the safety of all of our students and we can’t allow children to share sunscreen,” she said. “They could possibly have an allergic reaction (or) they could ingest it. It’s really a dangerous situation.“

These are the best of the best we have teaching and administering our schools?

One of my god-children has an allergy to certain types of sunscreen. She was well-aware of her own situation even before she started school. We were aware, the family was aware. It’s not rocket science people.

“Where do you draw the line?” she asked. “Do we say no hand sanitizer? Do we not allow school glue?

There are literally thousands of items … food, scents, lotions… that someone can be allergic to. Heck, people are allergic to newspaper ink and printer ink and toner! We should remove those items from all schools immediately … “They could possibly have an allergic reaction (or) they could ingest it. It’s really a dangerous situation.”

Now – of course – there is a work-around. Since some kids do require “medication” at school, parents can present a doctor’s note saying the kid should be allowed to reapply sunscreen during the day if he or she is outside. But do you think the kids would be allowed to take care of this task themselves? Oh no, it must be supervised to ensure no other children comes in contact with the toxic substance. It should probably be controlled and applied by a [union] professional earning a “living wage” for their family of four.