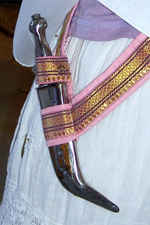 We’ve read about the ridiculous zero tolerance enforcement in public schools for years. In Detroit, the school board banned Sikh students from wearing a religious dagger called a kirpan, but have recently reversed the ban. I think the school made the right decision for the wrong reason.

Baptized Sikh males are expected to carry a ceremonial daggar, and now the students will be able to wear it at school under certain conditions.

Does this sound like a common sense solution to you? I guess it is.

So – and you’ve got to know where I’m going with this – why does a religious exemption of any kind get this amount of attention from a school system that promotes “zero tolerance” across the board? Certainly the school system must understand the message they are sending … but maybe not. 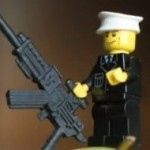 We’ve got some pretty over-the-top stories out there about high school students disciplined for bringing a paring knife to school, and an honor roll Eagle Scout suspended for a month for having a pocket knife locked up in a survival kit in his car.

Don’t forget the complete and total overreaction by a school principle in New York when a 9-year-old kid was disciplined for bringing a “gun” to school. See the “gun” in the image to the right? A gun is a gun ya know?

All of those stories got plenty of media attention. In probably more than a few cases we probably do not have the full story, but still … is there any way possible we can apply some common sense here?

Why the religious exemption? In my mind the school system is allowing this exemption so they don’t look like racists or bigots, simple as that. They are probably so afraid of looking like racists they would rather someone die than be labeled a bigot.

Religious exemptions that make us not look like racists? Good.

Think maybe I’m stretching it a bit? OK, but when this off-duty firefighter (watch video) was trying to get a 4-year-old boy out of the back seat of a burning SUV, he wished he had a knife. He was screaming for someone to give him a knife (1:35 into the video). A good knife can be used as a tool to save someone’s life, why ban it in school?

If we’re going to ban knives, might as well ban baseball bats … and strip out all of the tire irons from the cars kids drive to school too…

Promised the world for decades … Detroit left in ruins