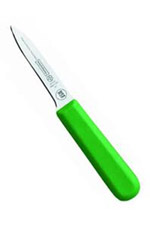 Even though the report states principals are supposed to consider the “true intent” of the student involved, they seem to have completely ignored the guideline. Teachers found a paring knife in the lunch box of 17 year old Ashley Smithwick’s lunch box at Southern Lee High School in Sanford, N.C. They expelled her. (See the update below.)

Don’t fall for the ‘suspension’ word in the articles you read. Smithwick – a senior – was flat out expelled from the high school for inadvertently bringing her dad’s lunch box to school instead of her own. She is no longer able to set foot on campus.

She was arrested and charged with misdemeanor possession of a weapon on school grounds for goodness sakes. From WRAL.com, with my changes and emphasis in bold.

“She got pulled into it. She doesn’t have to be a bad person to be searched,” Smithwick’s father, Joe Smithwick, said.

The lunchbox really belonged to Joe Smithwick, who packs a paring knife to slice his apple. He and his daughter have matching lunchboxes.

“It’s just an honest mistake. That was supposed to be my lunch because it was a whole apple,” he said.

Ashley Smithwick said she had never gotten in trouble before and was surprised when the principal opened her lunchbox and found the knife.

The teen was initially given a 10-day suspension, then received notice that she was suspended expelled the rest of the school year. 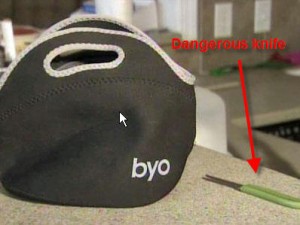 What exactly are we teaching our elementary, middle and high school kids when we treat them this way?

Unfortunately, the ‘incident’ happened in October, right when colleges are accepting and considering applications for the fall 2011 semester. Hopefully, this incident will not cause an issue for Smithwick, but knowing the education establishment stupidity …

Smithwick is currently finishing up her high school courses online.

These zero tolerance rules have been implemented supposedly to ‘make kids safe’ but they really exist – as far as I’m concerned – to make the lives of teachers and administrators easier so they don’t actually have to think for themselves when it comes to situations like this.

Big Government picked up on the story this afternoon.

Update: Thanks to AP at Hot Air, I’m reading that the school is refuting claims by Smithwick. So, let’s see what happens next.

Lee County Schools Superintendent Jeff Moss said in a statement on Wednesday that the 3-inch-long knife was found in the teen’s purse, not her lunchbox. The search was conducted on Oct. 20 after a faculty member at the school discovered a student on campus with marijuana.

Moss also denied Smithwick’s claim that she was issued a long-term suspension over the incident.

“She is currently enrolled as a student at the school,” Moss said.

Symptom of the Disease: Journalist thinks Connecticut governor must “win”...
Scroll to top