I certainly did not remember such a high percentage of graduates with honors during my stint (late 1980s) in college. Were students getting smarter or were standards being lowered?

Knowing the academic world as I do, I figured it was the standards. At the time, I thought it would be a good idea to look at graduate statistics during the last 20 years to see what percentage of students graduated with honors. 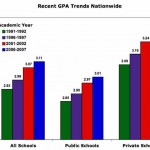 Stuart Rojstaczer, a retired Duke professor, has looked into the subject and has a detailed Web page about grade inflation. Rojstaczer collected data from more than 200 schools and reviewed grade point averages, which directly reflect honors status.

Grade inflation started in the 1970s and accelerated in the 1980s. Click on the image to see recent GPA trends across the country.

Do take a look at the charts and comments on Rojstaczer’s page, he found grade inflation did not occur everywhere and one very substantial set of data showed no change – even a decline – in grades. Your reader participation homework is to find out where, and post it in the comments. 😉

Thomas Reeves at the National Association of Scholars took a look at Rojstaczer’s research and has a recap.

It is no secret that grade inflation is common within contemporary academia. The extent of it, however, is known to comparatively few. One student of the topic, Stuart Rojstaczer of Duke University, recently published data showing a steady increase in undergraduate grades from 1991 to 2007. In public institutions the average GPA rose from 2.93 to 3.11. In private schools the average GPA climbed from 3.09 to 3.30.

This escalation appears more dramatic within a historical context. Rojstaczer observed that in the 1930s the average GPA at American colleges and universities was about 2.35; in the 1950s, it was about 2.52. In the turbulent 1960s, grades soared; they leveled off somewhat in the 1970s, and then began again to escalate in the 1980s. “The grade inflation that began in the 1980s has yet to end.” And this is true at all sorts and conditions of colleges and universities in both the sciences and humanities.

Some college administrators will tell us that the higher grades merely reflect higher-quality students. Balderdash! SAT scores have been in decline for four decades and at least a third of entering freshmen must enroll in a remedial course either in math, writing or reading, which indicates academic fraud at the high school level. A recent survey of more than 30,000 first-year students revealed that nearly half spent more hours drinking than study. Another survey found that a third of students expected B’s just for attending class, and 40 percent said they deserved a B for completing the assigned reading.

Parents with kids in college… how does this make you feel?

Teachers on both coasts paid to do nothing Free cars for welfare recipients – now with AAA!
Scroll to top