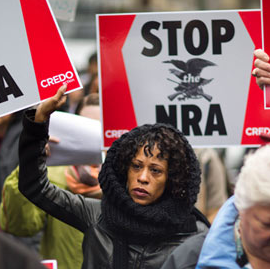 Well, maybe some of them are, but there are crocks out there who think the NRA should be declared a terrorist organization and membership outlawed.

One of them is Donald Kaul, who supposedly came out of retirement and wrote an opinion piece calling for the 2nd Amendment to be repealed. But that’s not all. One friend of mine told me nobody was suggesting the government take away your guns. Hogwash. The New York governor recently used the word confiscation and here’s another example of a crackpot fool who thinks he’s better than all of us.

Here is Kaul’s proposed agenda to “end” gun violence in America. My emphasis…

Repeal the Second Amendment, the part about guns anyway. It’s badly written, confusing and more trouble than it’s worth. It offers an absolute right to gun ownership, but it puts it in the context of the need for a “well-regulated militia.” We don’t make our militia bring their own guns to battles. And surely the Founders couldn’t have envisioned weapons like those used in the Newtown shooting when they guaranteed gun rights. Owning a gun should be a privilege, not a right.

Declare the NRA a terrorist organization and make membership illegal. Hey! We did it to the Communist Party, and the NRA has led to the deaths of more of us than American Commies ever did. (I would also raze the organization’s headquarters, clear the rubble and salt the earth, but that’s optional.) Make ownership of unlicensed assault rifles a felony. If some people refused to give up their guns, that “prying the guns from their cold, dead hands” thing works for me.

Then I would tie Mitch McConnell and John Boehner, our esteemed Republican leaders, to the back of a Chevy pickup truck and drag them around a parking lot until they saw the light on gun control.

And if that didn’t work, I’d adopt radical measures. None of that is going to happen, of course. But I’ll bet gun sales will rise.

So confiscate weapons we currently own, and if we refused we should be killed. Then take a few GOP leaders and torture them.

Delusional man … but I can’t seem to find one ounce of pity for him. Why did the Des Moines Register publish the piece? It’s simple, they KNOW it would drive traffic to the site just like publishing a map with the addresses and names of permit holders has proven to do. They are using the gun control issue for financial gain, pure and simple.