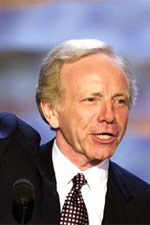 Kevin Rennie’s posted news this afternoon indicating Sen. Joe Lieberman (I-Conn.) will not run for re-election in 2012. Earlier today, Secretary of State Susan Bysiewicz announced she would be running for the seat as a Democrat in 2012. Linda McMahon still may be in for the next round, and Peter Schiff is still interested. Still, it’s a stretch to think Connecticut would send a Republican to the Senate in 2012, but you never know…

From Rennie’s site this afternoon. (His site is currently getting slammed probably from the Hot Air link.)

United States Senator Joseph Lieberman (I-CT) is expected to announce Wednesday that he will not seek a 5th term in 2012, Daily Ructions has learned.  Lieberman has invited supporters to an event at the Marriott hotel in Stamford Wednesday afternoon for his announcement.

Molly Ball and Manu Raju at Politico are also posting this afternoon.

“After many thoughtful conversations with family and friends over the last several months, Sen. Lieberman made a decision about his future over the holidays which he plans to announce on Wednesday,” said Erika Masonhall, a Lieberman spokeswoman who declined to comment further.

Lieberman is scheduled to speak at 12:30 p.m. at the Marriott Hotel in Stamford, Conn. Last month, he told MSNBC that if he ran, it would probably be as an independent.

Just today, Secretary of State Susan Bysiewicz announced she will be running for Connecticut’s seat in 2012.

Amid growing speculation that he will not seek re-election in 2012, U.S. Sen. Joe Lieberman’s office said Tuesday afternoon that the Democrat-turned-independent will announce his intentions in Stamford Wednesday.

“You can bet the farm” that Lieberman won’t seek a fifth term in 2012, said a Democratic insider who is close to the 22-year Senate veteran.  But neither Lieberman nor his Senate office would confirm that.

That makes two Democratic retirements in the span of about six hours. Unlike Conrad’s, this one almost certainly won’t end with a GOP pick-up, but having Lieberman in the Senate for the next two years and more unconcerned than ever with pleasing progressives means he could end up flipping our way on some key votes. Joementum!

Sister Toldjah writes about some other Senate announcements already made or in the works.

Malloy To Hospital CEOs: ‘I Know You All Want More of My Money’
9 replies

The Week in Stupid: Cable Pundits on the Giffords Shooting.
Scroll to top