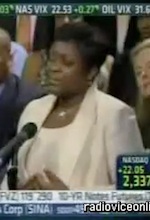 The woman who became a media sensation in September when she asked President Obama “Is this my new reality”, is back in the news and the news is not good. She’s lost her job.

According to reports this morning, Velma Hart was let go as the chief financial officer for Am Vets, a nonprofit Maryland-based veteran services organization. I’m not saying this is the result of her speaking ill of the President, but she did stick her head above water.

Hart has become another casualty of the tough economy in which so many people have lost their jobs.

“It’s not anything she did,” said Jim King, the national executive director of Am Vets. “She got bit by the same snake that has bit a lot of people. It was a move to cut our bottom line. Most not-for-profits are seeing their money pinched.”

King would not say whether the organization had had other layoffs.

“Velma was a good employee,” he said. “It was just a matter of looking at the bottom line and where could we make the best cuts and survive.”

King hadn’t seen the irony in Hart being fired just two months after she emotionally told Obama about her fears for her own financial well-being during a town hall meeting in Washington.

“I hadn’t thought about this in connection to the town hall meeting. She was at the town hall as a private citizen. Whatever she had to say were her own thoughts,” he said.

You just know, when she spoke to the President, she could feel this coming. Anyone who has ever lost a job can see it coming. You’re just hoping things change, quickly. You are hoping the economy turns around. You are hoping the young President will stop stepping on the oxygen hose.

Steve covered her original remarks here, when she first confronted the President at a CNBC town hall.

That “hope and change” is fading fast, while Obama’s approval numbers are sinking quickly to Bush “war” territory.

Obama’s job approval rating as calculated by the Zogby Poll has now sunk to 39%, a new low for his 22-month presidency that began with so much hope and excitement and poll numbers up around 70. As recently as Sept. 20, his job approval was 49%.