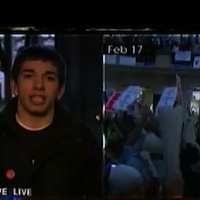 Maybe the best video you will watch coming out of the Wisconsin Teachers job action. But then again, there’s so much. The teachers have made up the bulk of the protestors pushing back against Tea Party Governor Scott Walker’s austerity plan. But it’s the students … ahhh … the students, who have provided able backup with people power and … ways to solve the crisis. Teach … your children well … their parents hell … and so yada, yada.

As teachers disrupted class at the state capitol to protest Scott’s plan to change the mostly teachers compensation plans, students took the opportunity to put the lessons they have learned in school to join the fray. One of those students was interviewed by Gretta VanSusteren, Jacob Fiksel. The interview is priceless especially when Gretta asks ole Jake to offer a solution to Wisconsin’s $3.6 billion dollar shortfall.

Gretta: In terms of your state do you have any suggestions on how to deal with your budget crisis?

Fiksel: Yes I do. I think we should really consider raising taxes on the rich. I know the argument against taxes is it’s really gunna hurt small businesses but with this plan if you are taking money away from teachers and public workers small businesses are going to lose millions of dollars but if we can raise taxes on the rich who can afford it and we can start to pay for our budget problems.

Hmm, where have I heard that before? Democrats? Organizing for America perhaps? Young Jake, if you allow private sector workers to keep more of their money it actually allows them to spend and boost the economy. When you take money from the private sector and put it into the public sector all you do is transfer the same cash … and, as we have learned, eventually you run out of other people’s money to spend.

He later tells Gretta that the “run away” Democrats should do whatever it takes to stop this bill. And, by the way, teachers would not lose their collective bargaining rights on pay, just benefits. And the cuts being planned are hardly worth skipping class for.

Workers would be asked to contribute:

The proposal includes limiting state employee wage increases to the rate of inflation unless approved in a voter referendum. Public employees — other than police, fire, and inspectors — would lose many bargaining rights and could opt out of paying union dues after current contracts expire, with dues no longer collected automatically.

Congressman Cummings asks the rich to help him out of the mess the Dems created.
13 replies