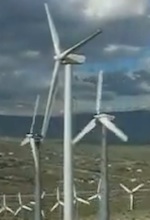 In a previous post I pointed out how windmills were killing Golden Eagles and other migratory birds.  However the story does not end there.  Most birds fly during daylight hours, but there is one creature that flies during the night.  Bats, a nocturnal flying mammal, are now at risk of death by none other than wind mills.

The United States Geographical Survey (USGS)  is now reporting that dead bats are being found dead under the windmills.  Bat deaths have now been reported not only in America, but at other wind mill farms around the globe.  One particular species, the Indiana Bat which is endangered now has to negotiate dark skies with  large metal blades cutting through the air to generate electrical power.

Several species of bats are already declining in numbers.  Here in Connecticut and New York and other areas as well,  bats have been battling White Nose Syndrome.  This is a poorly understood fungal disease that has already killed 5.5 Million bats and has been found throughout the Northeastern United States and south to North Carolina.  So far White Nose Syndrome has been found in over 115 caves and mines where bats hibernate for the winter.

So what do we end up with? Windmills generating electrical power by wind during the day kill birds of prey.  Windmills at night killing bats.  So when do we really make wind power a real economical choice for electrical power?

You can read the USGS report by following this link:
http://www.fort.usgs.gov/batswindmills/

You can read more on Indiana’s Wind Mills here :
http://tribune-democrat.com/local/x345569257/Windmills-to-shut-at-night-following-demise-of-rare-bat

And you can find out more about White Nose Syndrome here:
http://en.wikipedia.org/wiki/White_nose_syndrome

Writers Note:  I am big fan of bats.  They play a vital role in the ecology.  They pollinate flowers, they eat insects including mosquitos, and are in general harmless.  Although the fear of one flying into your hair and getting tangled is nothing more than an old wives tale, they can at times carry RABIES; a virus that attacks the the CNS and other body organs.  Bats over all infection rate for rabies is somewhere around 1% and it depends on the species of bat.    These are wonderful creatures, and fun to watch on a summers eve.