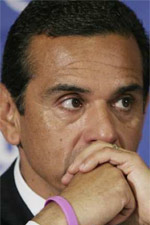 There seems to be plenty of huffing and puffing from Los Angeles politicians as they beat their collective chests about banning travel to, and doing business in, Arizona. But will the politicians refuse to take energy – and water for that matter – from their neighbor state?

I doubt it. I’ve been out of the loop the last three weeks, but I’ve heard the stories about municipalities, cities and other states not wanting to do business with the state of Arizona since they are now so racist for stepping up to enforce the laws President Obama refuses to.

But when I heard about southern California – specifically the City of Los Angeles – planing to boycott Arizona, my first thought was power and water. I’m not too familiar with the quantity of power and water LA gets from Arizona, but from what I read it’s 20 to 25 percent.

I’ve visited the Hoover Dam a few times, I know one side of it is in Arizona, and I know it generates mucho power.

Today I read over at Hot Air that there has been some back and forth between LA Mayor Villaraigosa and some utility officials from the Grand Canyon State.

First the LA mayor backs the suggestion of a boycott, then Gary Pierce – a commissioner from the Arizona Corporations Commissions – suggests the power utility who provides the power to the city could sit down and discuss the contract.

Mind you now, Pierce did not threaten to turn off the power. He just suggested if they really want a boycott, they should put their cards on the table.

Morrissey notes the mayor of LA considered the suggestion a threat, and completely missed the point of Pierce’s great retort.

Yesterday, Arizona Corporation Commissioner Gary Pierce challenged the city of Los Angeles and its mayor, Antonio Villaraigosa, to put their money where their mouths are by ending their purchases of electrical power generated in Arizona.  In a letter exclusively provided to Hot Air, Pierce questioned how a city-wide boycott of Arizona would work while LA continues to light the city with Arizona electrons.  In response, Villaraigosa bravely … ducked the question entirely:

Mayor Villaraigosa is in Washington D.C., meeting with Mexican President Felipe Calderon, but his deputy chief of staff issued the following statement: “The mayor stands strongly behind the city council and he will not respond to threats from the state that has isolated itself from an America that values freedom, liberty and basic civil rights.”

Come on mayor, cut the umbilical cord you and all of your Los Angeles brethren have to the racist state of Arizona. It’s the right thing to do.

Who wants to take a bet on the size of the crowd – mostly from southern California – who will be visiting and partying in Lake Havasu City on Memorial Day Weekend? All those jet boats are ready to go … trust me.

LA Health Officials to show kids how to use ecstasy safely … in the name of safety?

Was immigration question on “papers” for Michelle Obama a plant...
Scroll to top