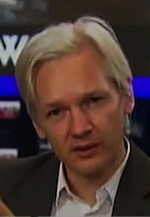 What more needs to be said. The Editor in Chief of the Wikileaks, the internet site that obtained and then published more than 90,000 top secret US military documents on the Afghan war, tells Andrea Mitchell, he needs help deciphering all the stuff he’s collected. Attention. On your feet. The left needs your help.

Julian Assange, who also told Mitchell he likened himself to the police, looking to obtain justice for the innocent, said he has been unable to analize all of the documents because he and his fellow journolisters at the NY Times and Globe just don’t have the knowledge to figure them out. It’s his hope some military people and intelligence experts will step to the plate and help them figure it out. Catch the number of documents he and his journolist gang have been able to translate and remember there are actually more than 100,000 documents.

No doubt, he’s a hero. Now if only he actually had the stuff to actually know what he’s talking about. Ironically he defended the leak because it was raw data and therefore was more dependable then the after AMerican analysts could “massage them. Now he’s the guy looking for help analyzing them. But not all of them. He told Andrea he held back some documents to protect his “Afghanistan sources”. This guy is too much.

Matthews: Stop bitching about the deficit and name some cuts – Congressman...

So much for transparency: SEC says they are now exempt from FOI requests
Scroll to top