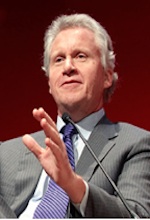 Once again the President proves he is out of touch with market economics by making what looks like more of a political decision than a sound business decision when rescuing the economy. Anyone who has been holding GE stock over the last decade is not very fond of a CEO who has helped drive their equity into a ditch. And yet … Immelt is the President’s choice for a jobs advisory panel? We can do better … and the young President should.

The President announced today that he has named GE CEO Jeff Immelt to his new economic advisory panel.

Signaling a shift to a new phase of the administration’s response to the nation’s economic woes, President Barack Obama will sign an executive order Friday establishing a new Council on Jobs and Competitiveness that will be led by General Electric CEO Jeffrey Immelt. The signing coincides with a visit to a GE branch in Schenectady, N.Y., the birthplace of the company.

The new panel will replace the President’s Economic Recovery Advisory Board, and will have a new mission: to find “new ways to promote growth by investing in American business to encourage hiring, to educate and train our workers to compete globally, and to attract the best jobs and businesses to the United States,” according to the White House.

But Erick Erickson gets it right in questioning this as a good move.

Since Mr. Immelt took over GE, we’ve seen its financial business bailed out by the federal government, its total number of workers decline, and its stock underperform the Dow and S&P 500 by 60%.

In other words, Mr. Obama wants to put in charge of job creation a man who has done his level best to contribute to high unemployment of the middle class, while subsidizing failed leftwing pundits at MSNBC.

Erick is actually going easy on the GE CEO. While the shareholders have gotten the shaft … Immelt has gotten the keys to the kingdon.

“The stock, which was $40 and change when Immelt took over, has collapsed to around $16. Even if you include dividends, investors are still down about 40%. In real post-inflation terms, stockholders have lost about half their money”, the article said.

Despite such a loss in value, Immelt has been paid about $90 million in salary, cash and pension benefits. This amount does not include the $5.8 million cash bonus he was “awarded” in 2009, or the bonus he skipped in 2008. Regardless Immelt still went home with $3.3 million in base salary during fiscal 2009 and total compensation of $9.9 million. For the last three years, Immelt has earned $33.5 million in compensation, or an average of $11.16 million per year.

Now, we’re not opposed ever to CEO’s making a good salary, but when shareholder value declines, and a company needs to turn to a bailout to survive (not to mention Government loans for its struggling capital arm) when future prospects for the company are dim given the company embarking on little more than it’s green agenda .. Immelt is hardly the man I would turn to to advise me on economic growth.

As Forbes noted in December … this is the same guy who just “narrowly avoided bankruptcy” for this historic company.

One fellow who isn’t on anybody’s list for honoring is Jeff Immelt at General Electric.  His predecessor, Jack Welch, frequently was.  Given that

Since Immelt took the helm at GE, the company’s value has actually declined.  He’s not likely to win any awards with that performance.  Amidst the financial crisis, he had to make a very sweet deal with Berkshire Hathaway to grab some cash (in exchange for preferred shares) in order to keep GE out of bankruptcy court. That deal has enriched Mr. Buffett’s company at the expense of GE investors.  GE has exited several businesses, such as its current effort to unload NBC via a deal with Comcast, but it has not created (or bought) a single exciting, noteworthy growth business! Under Mr. Immelt, GE has become a smaller, lower growth company that narrowly diverted bankruptcy.  That isn’t exactly a ringing endorsement for honors!

Immelt has taken GE on the wrong track, as both value and employees have declined and now he’s advising the President on economic growth.

Quick … what do Immelt and Treasury Secretary Tim Geithner have in common? Hmmm? Have no fear … the nation is in the best of hands.

Senators can filter information on their own, presidents can not