So the United States Chamber of Commerce (USCC) puts forward the denier’s skeptic’s opinion that having the Environmental Protection Agency regulate so-called greenhouse gasses is bad for the economic strength of the United States. Some companies quit the Chamber. Now we’ve got fake USCC Web sites and news releases “reversing” their opinion?

The fake Web page that has the release is exactly like the Chambers real site, but the URL is totally wrong. Click on the graphic below to see the full page.

If you complain about “false information” being spread by Fox News and blogs, what say you about mainstream media outlets that don’t do any fact checking at all and fall – quickly – for fake Web pages with press releases? From Ed Morrissey at Hot Air…

That can’t be said for news outlets like the Washington Post, New York Times, CNBC, and especially Reuters, who originally reported on it. That kind of an about-face by the USCC should have set warning bells ringing in newsrooms. What was the likelihood of the USCC not only backing cap-and-trade but also demanding a new carbon tax on top of it? And how long would it have taken for someone to look at the USCC website to confirm the information? Even the slowest of connections would take no longer than a minute for the page to load – or to notice the difference in the URLs.

At the conference this weekend, one reporter noted that bloggers rarely pick up a phone to verify information, a criticism with more than a little truth to it. Unfortunately, that appears to apply to reporters as well. 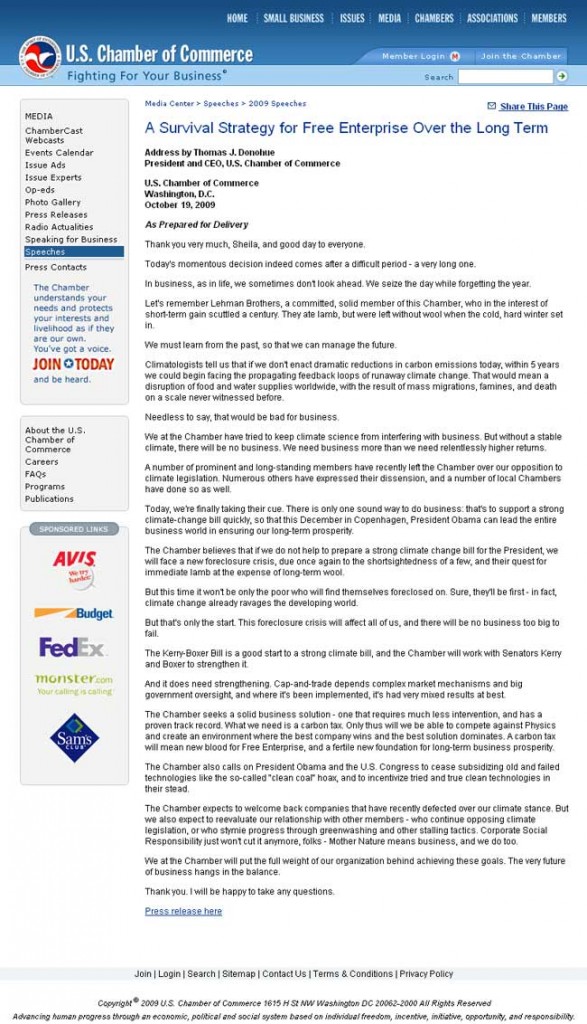 Obama certain US Chamber of Commerce is threat to our democracy

Obama: The planet will boil over…