You may see this come up over the next day or so. You may have heard about Whoopi Goldberg’s assertion that Roman Polanski did not commit RAPE rape, whatever… But Toys r Us has a circular that defines Goldberg as a child advocate.

As a reminder, here is the video from The View yesterday. Goldberg wanted to get the facts straight, which is understandable, but come on … does it seem to you that the Hollywood elite and Europe’s upper-class are trying to justify or re-define what Polanski did?

My opinion is that Roman Polanski should be shamed, not adored. I’m not sure what Whoopi thinks, maybe she will clarify by the weekend. The real problem for many is Polanski continues to get accolades from those who cry to remove conservative talk show hosts from the airwaves. It just doesn’t sit well with people.

And here is your child advocate in one of the current Toys r Us circulars. Nothing more from me, you can comment on your own below. 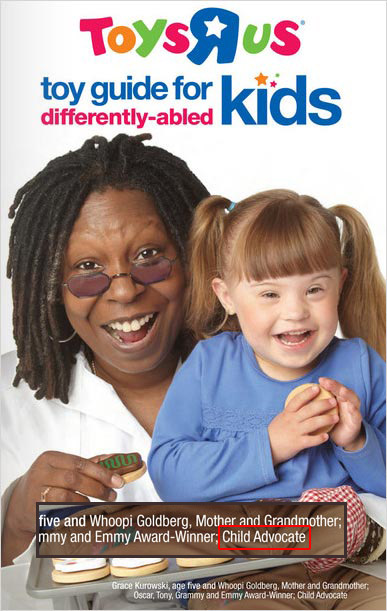 It’s OK To Be Nice … Obama is President