While distributing the largest federal budget in the history of the world, administration staffers reminded everyone the country would be running huge deficits for the foreseeable future, and there is nothing anybody can do about it.

Remember when Democrats and conservatives alike used to complain about $300 billion deficits? Hah! $1 trillion is the new billion baby. From the Washington Times.

Trying to get a handle on spending while pushing for the economic recovery to continue, Mr. Obama Monday will send Congress a $3.8 trillion budget for fiscal year 2011 that administration officials describe as “pragmatic.” The plan freezes a large portion of domestic spending while renewing several tax cuts for middle-class households and boosting funds for education and energy initiatives.

The budget is likely to tee up an intense fight on Capitol Hill, where Mr. Obama is asking lawmakers to approve cuts or eliminations in 120 federal programs in an election year. Several key Democratic leaders have already voiced opposition to some of the targets, such as eliminating future purchases of C-17 cargo planes and NASA’s Constellation mission to return astronauts to the moon.

Lots of talk about making major cuts here and there, but the real problem has been the tremendous growth of the federal government and their spending during the last two decades. Of course, spending went into hyper-mode just one year ago when Congress and the Executive Branch quadrupled the deficit in a matter of hours.

Oh yeah … the president budget is 6 percent larger than last year’s. Got that? Six percent!

President Barack Obama will propose on Monday a $3.8 trillion budget for fiscal 2011 that projects the deficit will shoot up to a record $1.6 trillion this year, but would push the red ink down to about $700 billion, or 4% of the gross domestic product, by 2013, according to congressional aides.

The deficit for the current fiscal year, which ends on Sept. 30, would eclipse last year’s $1.4 trillion deficit, in part due to new spending on a proposed jobs package. The president also wants $25 billion for cash-strapped state governments, mainly to offset their funding of the Medicaid health program for the poor.

Weisman also feels the need to point out – twice – that Obama inherited the $1.4 trillion deficit and I’m totally sick of that excuse. Enough with the blame Bush crap – I blame the federal government including the Executive Branch and Congress.

We’ve doubled the size of the federal government in 10 years. That, as I’ve noted more than a few times is the disease.

Update: As Malkin notes, the flood of bright red ink is on the way. She points us to the recently released Republican charts, painting a simple picture. Here is just one, proving we’re writing checks our body can’t cash. 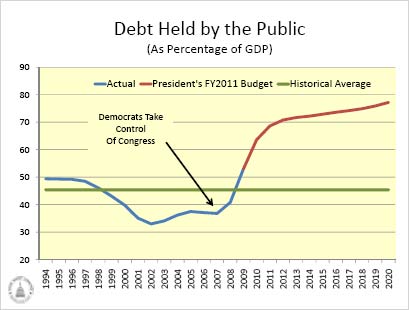 Obama is the best thing to ever happen to … libertarianism?

People really think they can sign up for free health care!

Not So Much Fun With The Dow – Update: Crash

How’s that $75 billion ‘Housing Rescue Plan’ working out for you?