Here’s the e-mail sent out this morning by President Obama’s political arm authored by Mitch Stewart, the director for Organizing for America, a.k.a. your White House. Can someone tell me if there ever has been a time where the White House has targeted a private citizen in such a way? Palin is not serving in elected office or running for anything, but they still feel the need to call her a liar?

Now remember, this is not the Democratic National Committee crying about the current popularity of Sarah Palin, this is President Obama whining and moaning about a private citizen who is on a book tour. Begging for money – a half million dollars mind you – proves the current administration sees Palin and the conservative movement as a serious threat.

They see this movement as a crisis, and you know good ol’ Rham … Emanuel is not one to let a crisis go to waste.

Here is the text of the e-mail. I’ve provided a screen shot as well, just click to enlarge.

Right now, Sarah Palin is on a highly publicized, nationwide book tour, attacking President Obama and his plan for health reform at every turn.

It’s dangerous. Remember, this is the person who coined the term “Death Panels” — and opened the flood gates for months of false attacks by special interests and partisan extremists. 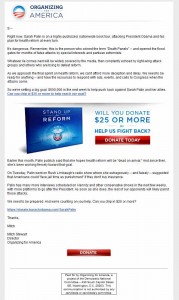 Whatever lie comes next will be widely covered by the media, then constantly echoed by right-wing attack groups and others who are trying to defeat reform.

As we approach the final sprint on health reform, we can’t afford more deception and delay. We need to be ready for anything — and have the resources to respond with ads, events, and calls to Congress when the attacks come.

So we’re setting a big goal: $500,000 in the next week to help push back against Sarah Palin and her allies. Can you chip in $25 or more to help reach our goal?

Earlier this month, Palin publicly said that she hopes health reform will be “dead on arrival.” And since then, she’s been working fiercely toward that goal.

On Tuesday, Palin went on Rush Limbaugh’s radio show where she outrageously — and falsely — suggested that Americans could “face jail time as punishment” if they don’t buy insurance.

Palin has many more interviews scheduled on Hannity and other conservative shows in the next few weeks, with more platforms to go after the President. As soon as she does, the rest of our opponents will likely parrot those attacks.

We need to be prepared. And we’re counting on you help. Can you chip in $25 or more?

Maybe the name calling and begging for cash was a result of the Fox News/Opinion Dynamics poll recently released … hat tip to Gateway Pundit who has some screen caps from O’Reilly on Thursday night. 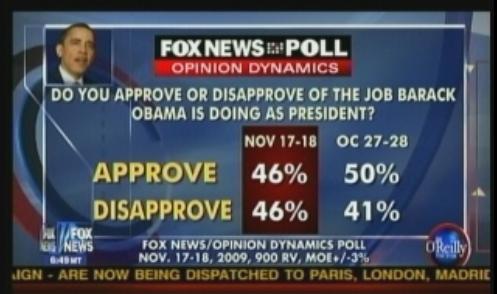 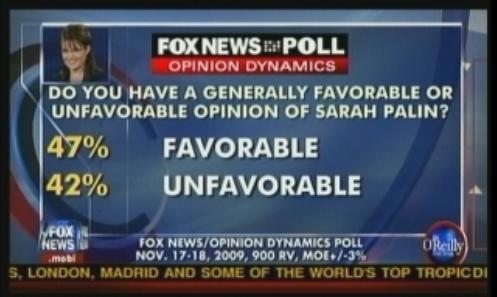