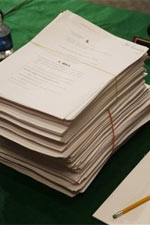 So, remember all those promises that the Democrats and the President made about healthcare?  Get to keep your doctor, save you money and it would all be delivered by flying unicorns?

Apparently, some one realized that insuring after the fact, this isn’t really insurance.

The Obama administration, aiming to encourage health insurance companies to offer child-only policies, said Wednesday that they could charge higher premiums for coverage of children with serious medical problems, if state law allowed it.

Earlier this year, major insurers, faced with an unprofitable business, stopped issuing new child-only policies. They said that the Obama administration’s interpretation of the new health care law would allow families to buy such coverage at the last minute, when children became ill and were headed to the hospital.

In September, the administration said that insurers could establish open-enrollment periods — for example, one month a year — during which they would accept all children.

Now, on Wednesday, the administration, answering a question raised by many insurers, said they could charge higher premiums to sick children outside the open-enrollment period, if state laws allowed such underwriting, as many do.

The short form is that the Democrat regime, realizing that it was too soon to run insurance companies out of sectors of the industry made untenable by recent “reforms,” especially in an election year, have relented so as not to further damage their efforts at controlling Congress.  Now, this is just a bandage — this is a temporary grasp of sanity, since it all goes to skittles in 2014.

Okay, I know you’re out there saying that maybe there was an unintended consequence, but this reform is going to strengthen Medicare, just like they’ve promised, right?

A Medicare official concedes that seniors may have to dig deeper into their wallets next year thanks to the health care law.

The new analysis obtained by POLITICO finds the health care overhaul will result in increased out-of-pocket costs for seniors on Medicare Advantage plans.

Richard Foster, the actuary for the Centers for Medicare and Medicaid, also tells Senate Republicans that the overhaul will result in “less generous benefit packages” for Medicare Advantage plans next year. Foster is independent from the administration and non-partisan.

Additionally, between these higher out of pocket costs could have the effect of forcing some seniors out of their current plans… so much for that “You can keep your doctor” business.
So… it is going to cost more, provide less benefit, destroy the market for child-only insurance.
Is this “reform” going to do *any* of the things we were promised?  I mean, the President wouldn’t lie just to get a bill he hadn’t read past, would he?
Maybe he thought we had to pass the bill to find out what was in it.
https://radioviceonline.com/wp-content/uploads/2010/10/frontpg-paper-stack-health-care-bill.jpg 225 150 Dave in EH https://radioviceonline.com/wp-content/uploads/2011/02/rvo-logo-4-300x100.jpg Dave in EH2010-10-15 07:38:002010-10-15 07:38:32When the Truth is Found to be Lies

Hey, let me eat my shrimp, or waffle, or something

Obama again displays the difference between statists and conservatives

Guantanamo detainees treated MUCH better than prisoners in USA
6 replies

The Larger Implications of the Global Economic Malaise…