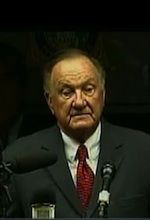 Having a convenient scapegoat means never having to deal with the truth.

The problem arises, however, when you’re story-line doesn’t match the known facts.  At that point, what I like to call “The Emperor has no Clothes” effect comes into play.  No matter how good your template and your story-line, the facts will continue to get in the way.

Following the tragic shooting in Arizona, the Sheriff of Pima County was quick to blame the shooting on the  heated political rhetoric, pushing the meme that this was somehow the fault of the usual suspects — talk radio, the TEA Party, etc.

‘In a news conference Saturday evening, Dupnik condemned the “atmosphere of hatred and bigotry” that he said has gripped the nation and suggested that the 22-year-old suspect being held in the shooting was mentally ill and therefore more susceptible to overheated messages in the media.

“There’s reason to believe that this individual may have a mental issue. And I think people who are unbalanced are especially susceptible to vitriol,” he said during his televised remarks. “People tend to pooh-pooh this business about all the vitriol we hear inflaming the American public by people who make a living off of doing that. That may be free speech, but it’s not without consequences.”‘

But, then a funny thing happened on the way to the high-tech lynching.  Facts started coming to the fore, such inconvenient things.  For example, the shooter, Jared Lee Loughner, was apparently known to the Sheriff’s office as someone, an individual giving to making death threats, yet his only criminal record was for misdemeanor marijuana possession and a traffic violation, thereby permitting him to purchase a Glock handgun.

Meanwhile, the blame game had already started, with the usual suspects and the usual tactics.

“Rahm Emanuel, Mr Obama’s former chief of staff and a ­figure compared to Labour’s Alastair Campbell, once said: ‘You never want a serious crisis to go to waste.’

And those on his side of the political divide have clearly seen the Tucson tragedy as an opportunity to score points and settle scores.

None more so than with Sarah Palin, a politician who is almost as divisive as the President. The former Republican vice-presidential contender has become a spiritual figurehead for many Tea Party supporters, but is loathed by many on the Left.

So it was that within minutes of the Tucson shooting, anti-Palin internet bloggers and Twitter users were highlighting a so-called ‘target map’ Mrs Palin had posted on her Facebook page last March.

Controversially, it used gunstyle crosshair targets to flag up Democrat politicians whom Palin felt could be vulnerable at the polls: Miss Giffords was one.”

All well in good, perhaps… until you do a little digging.

“The map appears on this page of the Democratic Leadership Committee website (dated 2004 during the Bush years). I guess we could argue over whether the DLC counts as “senior party officials” but they’re certainly as much a part of the party as Palin who, after all, currently holds no elected office.

Granted these are bulls-eyes instead of gun-sights, and the targets are states not individual congressmen. But we’re really splitting hairs at this point. This map and the language it uses (Behind enemy lines!) are, if anything, more militant than what Palin used in her Facebook posting.”

As for the small matter of comity, I am a little perplexed that the Dems would decide that manners are important.  I mean, where was this liberal interest in decorum during the Bush years?

However, the final insults were yet to come.

First, there was one Democrat’s new idea for outlawing colorful speech, at least when directed at the political class…

In the wake of the tragic Arizona shooting, Rep. Bob Brady (D-PA) says he plans to introduce a bill criminalizing the use of certain forms of threatening imagery against lawmakers and judges.

“You can’t threaten the president with a bullseye or a crosshair,” Brady told the New York Times. He explained to CNN that his bill would also ban symbols or language that threaten “a congressman, senator or federal judge.”

The congresswoman plans to discuss the legislation this week with Speaker John Boehner and Minority Leader Nancy Pelosi, her staff confirms to CBSNews.com.

“We need to look at how this is going to work, to protect people, certainly citizens, and we have to look at what I can pass,” McCarthy said. “I don’t want to give the NRA – excuse the pun – the ammunition to come at me either.”

I would recommend that Ms. McCarthy stick to her day job as grieving widow and political opportunist and leave the comedy to professionals.

The prize for the most opportunistic bit of ghoulishness, however, has to go to Bernie Saunders of Vermont, who decided that the event would make a good back-drop for his latest fund-raising effort.

Mayo says no to Medicare at Arizona facility
4 replies