At 6 pm Friday evening, we learned that the negotiations between the President and the Speaker of the House concerning the debt/deficit fell apart.  Why?

This much we do know.  Prior to Thursday, although nothing was “cast in granite”, both parties to the negotiation had generally agreed that a piece of the bargain would be $800 billion in increased revenue.  This would be accomplished by reforming the tax code by lowering tax rates for all, and eliminating some, or all deductions.

On Thursday, however, the President, “moved the goal posts” by demanding that the revenue increase be $1.2 trillion.  The Speaker took that as an indication that the President wasn’t negotiating in good faith, and called off the discussions.

This much is the current speculation.  On Wednesday, the “Gang of Six” released its 7 page outline of its plan, and the President learned that their plan called for an increase in revenue, via tax code changes, of, depending upon how the Congressional Budget Office scored it, anywhere from $1 trillion to $3.1 trillion.  Some say the President saw that, and decided he could get more money out of the conservatives, and thus, upped the ante.

UPDATE (Jim): I cannot vouch that the Boehner version is 100% on how it went down. Perhaps the President felt he wasn’t out of line for asking for more, since nothing was on paper. But I think that’s what drove Republicans crazy, that the President was never willing in initial anything in writing.

Here’s a report on how it all deteriorated, not from Fox, but last night from NBC’s Kelly O’Donnell. It’s a deal … then poof .. no deal, and all over taxes.

My guess is the petulant President thought he could buy his side a little more and that’s a dangerous thing to do in money talks. I know. I’ve been there. All in all the President’s lack of experience in business, I think showed.

BTW, here’s the pix released by the WH at the start of talks this morning. Boehner sipping tea … Obama T’d off. One pic is worth a thousand words.

COME ON my little mobsters … give me a caption for this pic. 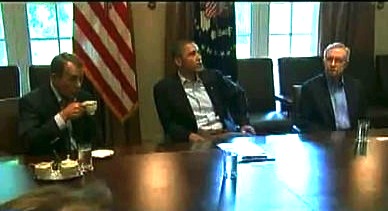 Just a heads up on the new “villain”

Federal government spending, where to cut and trim
22 replies