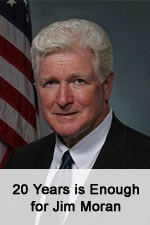 Totally unacceptable, but totally expected from an entrenched incumbent. Rep. Jim Moran (D-Va.) spoke in front of the Arlington County Democratic Committee on Oct. 6 and expressed no regard what-so-ever for his opponent’s 24 years of service in the U.S. Army. Professional politicians are good, outsiders are bad.

Here is a web-ad from retirejimmoran.com – the 8th District Republican Committee. As a reminder, Moran has been in Washington, representing Virginia’s 8th, for 20 frigging years.

Hat tip to MCQ at Blackfive, and Ed Morrissey is also writing. (And I thought I was ahead of the game on this one.) Bill Kristol notes…

Jim Moran is well known to be an arrogant, unpleasant, and self-important man. He’s been protected from paying any price for his defects of character by having a safely Democratic Northern Virginia seat, one that’s heavily populated by federal government workers and others friendly to big government. But for many decent liberals, this comment could be the straw that breaks the back of their willingness to continue voting for Moran.

Of course the VFW PAC actually endorsed Moran in late September, and the VFW membership and leadership was so disgusted about the PAC’s selections they announced the PAC would be dissolved completely.

An apology to retired Army Colonel Patrick Murray is not enough. Moran needs to be taken out with the trash on Nov. 2, but the problem is Moran’s seat is considered his seat, and is currently considered “Safe Dem” as far as I can tell. I can’t even find any polling from Virginia’s 8th District for goodness sakes.

Update: AJStrata at Strata-Sphere blog noted an internal Republican poll back on Oct. 13 that had Moran with less than 50 percent support. Not good for an incumbent, but take it for what it’s worth.

This is a great example of the Washington political elites who are incumbents and think they know everything. Professional politicians are the way to go, and those of you with extensive experience in business, the military, or in the local PTA need not apply.

Pathetic. He’s got absolutely no respect for those candidates who have not had the professional political experience he’s had. Elitism at its finest. He expressed the same disregard for candidates who were simply common folk back in May during a debate. (You’ll have to turn up the volume on this one.)

I’m not sure if The retired Army colonel and northern Virgina voters have an opportunity to send Moran back home, but if you’d like to directly donate to Patrick Murray’s campaign, click here to send him a few dollars of support. For those readers in Virginia’s 8th, how about a ground campaign to go door-to-door and discuss the issues?

Edit: I certainly should not have been so negative about Murray’s chances.

The incumbent Moran has more than $600,000 available to spend, with almost 40 percent of his total donations coming from PACs.

I’ve got no issue with PAC funding, but from the get-go, this seat has been solid Democrat all the way so the PACs and the party are bound to spend their resources where they think it will do the most good. Patrick Murray needs individual support and volunteers on the ground. Good luck to him. 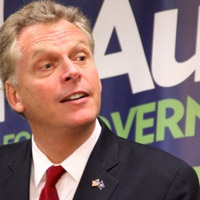