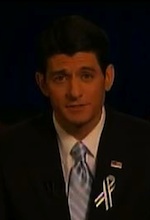 They won’t win awards for warm and fuzzy and they won’t win friends for calling for budget cuts … instead of freezes … but they will, for responding to the American people.

Budget king Congressman Paul Ryan offered the first rebuttal to the President’s SOTU and his message was clear throughout. We stand for a smaller and limited government because big government drains resources and limits freedom and true economic potential.

Two bites for you: The first, Ryan outlines all of the spending that Obama has promulgated with little result. Calling it like he sees it.

But more importantly, Ryan clearly outlines where we are headed as a nation.

Almost on cue … the CBO came out today and provided this stunning headline:

But of course the AP points out tax cuts are to blame:

Legislation passed in December to extend tax cuts, unemployment benefits for the long-term jobless and provide a 2 percent payroll tax cut this year adds almost $400 billion to this year’s deficit.

Set aside that spending, not tax cuts create a deficit. But even if those cuts were to be eliminated we’re still talking a 1.1 trillion dollar deficit. Not exactly Scrooge. We are headed for a cliff and Ryan gets it.

As for Michelle Bachmann’s response, I direct you to two links. First to my friend John Hinderaker at Powerlineblog who’s post not only reviews all three speeches from Obama, Ryan and Michelle Bachmann … but provides a transcript of a portion of Bachmann’s speech.

Second, you must head on over to my friend Ed Morrissey’s post on Congresswoman Bachmann and the snit thrown on the left because CNN decided to carry the speech … plus … Ed’s take on what she had to say.

As for the speech itself, I’d say that Bachmann did a good job in both emphasizing her role as a spokesperson for TPE rather than the GOP and sticking with economic and fiscal issues. She went a little further into a Perot-like presentation than I’ve seen her do in the past, but then Bachmann also used more thematic language …

Both posts are great.

UPDATE : I have updated the spelling in Congresswoman Bachmann’s name in the post title. My bad.