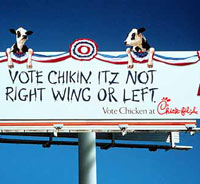 I understand a governor standing up for local business, but when the dispute is specifically about trademark infringement, why is he telling Chick-fil-A to stop messing with Vermont small businesses and local agriculture operations?

I’m not sure Chick-fil-A has any standing when it comes to trademark infringement, but I find it strange the Vermont governor is speaking as if he’s a leader, if not the leader, in the Team Kale T-shirt business. Is Gov. Peter Shumlin (D) operating or managing a legal defense fund for a Vermont resident who is in a disagreement about a trademark? Have we seen anything like this before?

Describing Chick-fil-A’s stance as an assault on small business and local agriculture, Shumlin, a Democrat, took a combative stance toward the company, saying: “Don’t mess with Vermont, don’t mess with kale.”

And he offered up what he called a “clear message” to the company:

“Don’t interfere with buy local. Don’t interfere with our agricultural renaissance — where we’re growing local food and selling it locally because more and more Vermonters care about where their food comes from, what’s in it and who grew it …. And don’t mess with our effort to create jobs, one job at a time.”

OK. But what about the trademark infringement case governor? Let’s say the courts rule this is infringement on Chick-fil-A’s trademark, is it OK to do that as long as the actions somehow support local agriculture or creates one job?

It may seem Chick-fil-A is going overboard sending letters from their lawyers to Bo Muller-Moore, but it is their right and responsibility to defend their trademark. In this article, it’s noted the chicken franchise has successfully defended its trademark against other companies who have tried to use the “Eat More [whatever]” phrase.

Muller-Moore has been making and selling the “eat more kale” T-shirts and other items for more than a decade. Chick-fil-A tried to get him to stop using the phrase several years ago, but gave up. They revived the effort after Muller-Moore filed the paperwork earlier this year so he could get a trademark to protect his phrase.

Muller-Moore’s lawyer states that since they “gave up” they abandoned their position. My guess is Chick-fil-A was fine with the little business making T-shirts, right up to the point where Muller-Moore tried to trademark the phrase himself.

In October, a lawyer for Chick-fil-A sent Muller-Moore a letter telling Muller-Moore he had to stop using the phrase “eat more kale” because it could be confused with Chick-fil-A’s trademarked term “eat mo chikin.” The letter also ordered him to turn over his website, eatmorekale.com.

That’s certainly not the only reason Chick-fil-A filed.  They are protecting their own brand and intellectual property, of which they have a trademark.

In a statement issued Monday, Chick-fil-A said it became aware of “Eat More Kale” T-shirts in 2006 and it had co-existed since, but that had to change after the Vermont company submitted an application to trademark its slogan.

“We support the entrepreneurial spirit of small business,” said the statement issued by company spokesman Don Perry. “Unfortunately, when protecting our trademark, the law does not allow us to differentiate between a large company or a small enterprise… we must legally protect and defend our “Eat Mor Chikin” trademarks in order to maintain rights to the slogan. It is not uncommon for us — or for any corporation — to defend our trademark rights.”

In short, Chick-fil-A thinks anyone who is using the Eat More [whatever] phrase is playing off the success of the chicken chain’s award-winning advertising campaign. I’m not a lawyer, but it looks like you can’t be doing that governor … and it has nothing to do with eating local produce. What say you?

How many Volts in a Tahoe?
Scroll to top