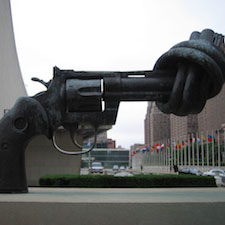 During the Reagan administration, the phrase used was “trust but verify.” If we agreed to reduce our nuclear weapon footprint, the USSR would do the same, but Reagan demanded verification of reductions. A “influential” panel has suggested if we just reduced the number of nuclear weapons, China might come to the table and talk.

I guess it’s kind of like telling Hamas, the Taliban and al-Qaida…

“Hey, we’re going to leave the Middle East next week. Since we’re leaving we think they might stop harassing the Israelis and recognize their state. We also think they might faithfully honor the human rights of women and children”.

An influential panel is calling for an 80 percent reduction of U.S. nuclear weapons and an elimination of all nuclear armed intercontinental ballistic missiles.

In a report for the advocacy group Global Zero, retired Gen. James Cartwright and others argue that the U.S. needs no more than 900 total nuclear weapons for its security in a post-Cold War world. The report chaired by Cartwright, a former vice chairman of the Joint Chiefs of Staff known to be close to President Barack Obama, comes at a time that the president is weighing a range of sharp nuclear reductions.

The president isn’t weighing much of anything right now, except the cash flowing into his reelection campaign. He won’t mention this at all until after the election. If he wins, we already know he’ll feel he has more flexibility to act unilaterally.

The report argues that such drastic cuts in nuclear forces by the United States and Russia could open the way for the two countries to open arms control talks with other countries, including China.

That’s funny, and the first thing I thought was “what about North Korea?” I guess if they mentioned North Korea, their report would lose all credibility.

Catholic school will no longer require or offer health care insurance to st...

Infuriating: Another example of gun-grabbing government theives
Scroll to top