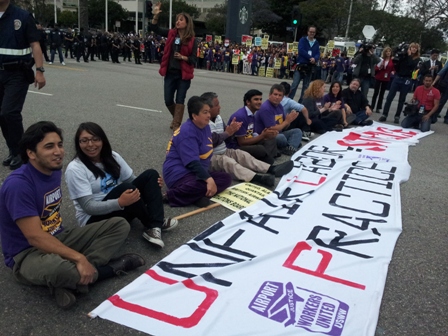 If you traveled through LAX yesterday, you may be under the impression airport union workers were protesting as a part of the May Day tom-foolery, and in turn delaying your flight. You may be incorrect.

One of the contractors at the airport was interviewed by Jo Kwon on KFI radio in Los Angeles during the protest and he claimed airport workers voted out the union in December. He says about 100 of the protesters were bussed in by the SEIU.

Kwon interviewed Joe Conlin, the Regional VP of Aviation Safeguard, who explained that on December 30th of last year, more than 50% of the airport’s 435 employees voted to leave the union.

So, Conlin told KFI the union does not represent the employees, but since less than half want to be represented, the unions feel they have the right to go in there to protest. Certainly some of the protesters may have been airport employees (I don’t know), but employees did claim they were threatened by union goons to stay home and not go to work.

The occupy.com website tells us right off the bat they do not represent the workers.

Gathering workers onto buses in the pre-dawn hours, a coalition of unions from across Los Angeles made for L.A. International Airport Tuesday to engage in a nationwide general strike, calling for greater organizing rights and safer working conditions for the airport’s 4,000 non-unionized employees.

I am unable to confirm the employees had a vote in December, refusing to either join the union or kick out the union, but the notion that these were hundreds of airport union workers – as claimed by many news stories – is certainly false. That said, we can use this as a perfect example of astroturfing a protest. Gather a bunch of sign-holding union members from a completely un-related area and bus them to a location where they bitch and moan about working conditions of the employees they do not represent.

By the way, why can these union members protest outside an airport terminal when they won’t allow my to stop out front for more than 60 seconds when I’m looking to pick a friend or family up?