I’m writing this at 8:46 a.m. ET, and Drudge has had the siren up for at least 12 minutes, while CNN is still behind the curve reporting the following.

CNNMoney is still reporting the following. I’m certain it will be updated at some point, but the article was posted at the end of the business day yesterday, and had not been updated by 8:48 a.m. ET. (Update: I think they just updated it.)

How does Drudge get the information up so quickly compared to CNN? Remember, the April figures were revised down to 77,000. The original number was something like 125,000 jobs created in April.

The economy was expected to have added 150,000 jobs last month, according to economists surveyed by CNNMoney. They project that the jobs report for May will show the private sector expanded payrolls by 162,000 jobs, but the government shed 12,000 positions.

The unemployment rate should hold steady at 8.1%.

All eyes are on Friday’s numbers, after April’s jobs report showed surprisingly weak growth of just 115,000 jobs, a significant slowdown from January and February, when more than 200,000 jobs were created each month.

So everyone expected the numbers to be plus 150,000 jobs and the unemployment rate would remain at 8.1 percent. As it turns out, the Bureau of Labor Statistics have estimated 69,000 jobs created and an unemployment rate of 8.2 percent.

Undoubtedly, those numbers will probably be revised downward in 30 days.

Here is the screen shot from the CNN story, since it will soon be pulled or re-written. 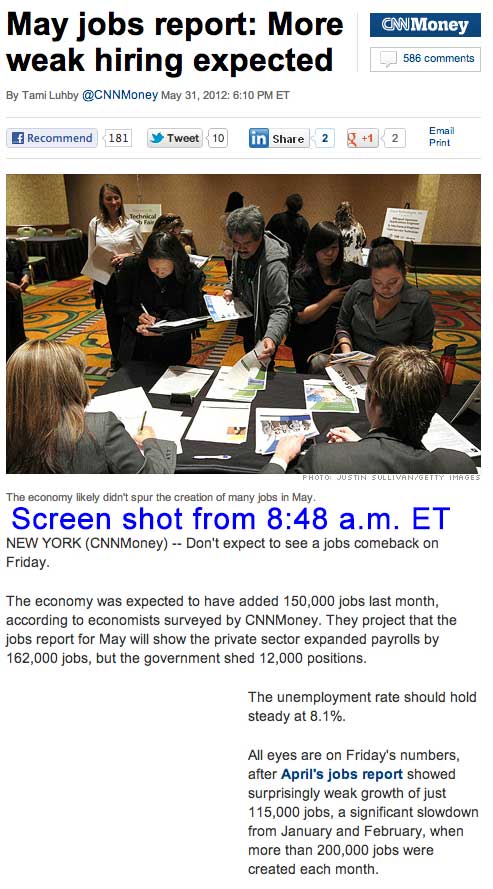 Good thing we did that stimulus, huh? Update: Video